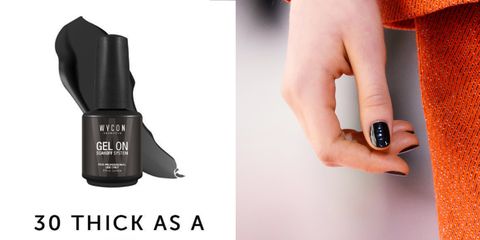 The year is 2018, and people are still unequivocally dumb and awful. And before you try to tell me otherwise, bombarding me with your positivity and optimistic quotes and your friend Barb who works for the Peace Corps, I bring you sad, sad, proof today.

A beauty brand is currently under fire for naming their black-toned nail polish an incredibly racist, offensive, terrible, WTF-worthy name: “Thick as a N****.” Except without the asterisks, because, I re-iterate, people are dumb and awful.

Yes, Wycon Cosmetics, an Italian cosmetics brand, named its new gel nail polish that insanely racist and ignorant phrase, and almost immediately faced backlash across the internet after Italian beauty vlogger Loretta Grace pointed out the name on her social media accounts, according to Forbes.

And if you’re thinking, hey, maybe it was just a mix-up, and the company will immediately issue a deeply apologetic statement, you’d be wrong! Instead, Wycon Cosmetics allegedly responded to the controversy with a simple statement: “They’re made-up names that are a bit crazy.”

The brand then continued to defend its actions, stating that all of its polishes are named after “famous song titles, many of which derive from the landscape of hip-hop,” before including “Drop It Like It’s Hot,” “Candy Shop,” and “Bootylicious” as examples.

Oh, okay, that’s fine, then. It’s totally fine to use appropriated culture and racial slurs to sell your products, right? Wrong. Just so, so wrong. Thankfully (I guess?), the brand has officially removed its “hip-hop” branding from its website, and is instead using a numbered system for the time being. They also issued a more formal apology on Instagram.

Luckily, though, the internet lives on forever, so we will #neverforget Wycon’s absolute shittiness.

Related Story
Should You Get Bangs? These Pics Say Yes
Chloe Metzger Deputy Beauty Director Chloe Metzger is the deputy beauty director at Cosmopolitan, obsessively writing about new makeup launches, the best hair products (curly girl here; whattup), and the skincare formulas that really work for every skin type (follow her on Instagram to see behind-the-scenes pics of that magazine life).
This content is created and maintained by a third party, and imported onto this page to help users provide their email addresses. You may be able to find more information about this and similar content at piano.io
Advertisement - Continue Reading Below
More From Trending Beauty
I Tested Meghan Markle's Top Beauty Products
Glitter Pumpkin Butts Are a Thing for Halloween
Advertisement - Continue Reading Below
Behold: The Self-Tanner Fail to End All Fails
This Is Pinterest's #1 Halloween Makeup Idea
These 3 Products Cured This Woman's Acne
Princess Eugenie Just Dyed Her Hair Bright Red
13,000 People Swear By This Eye Cream
Post Malone Cut His Hair and Looks Unrecognizable
Shay Mitchell Will Only Use This One Concealer
People Are Freaking Out About Emma Stone's Hair