It’s the end of an era, folks. Kylie Jenner has confirmed that she has removed all of her lip fillers, and that the famous, signature Jenner pout is officially no more.

It’s been a minute since the world last caught sight of Jenner’s natural lip shape, but it seems that the new mom has decided to go back to her old school look for a little while. Jenner confirmed the news in the comments of her latest Instagram photo, which saw her posing with best friend, Anastasia Karanikolaou.

Almost fooling us into thinking it was 2014 all over again, Kylie was sporting a noticeably different face. Still can't put your finger on it? When one user noted: “She looks like the old Kylie here, IDK why,”, the Kylie Cosmetics queen replied and cleared up the mystery. “I got rid of all my filler,” she revealed, along with two shocked emojis and a smiley face.

Kylie’s surprise decision to ditch the fuller lip look comes in the same week that she opened up about daughter Stormi inheriting her own appearance insecurities. Talking honestly in a Q&A, Jenner said: “She’s looking a lot more like her dad. The one thing I was insecure about, she has. She has the most perfect lips in the whole world. She didn’t get those from me.”

After the whole world spent months trying to figure out which lip liner she was using for her miraculously enlarged pout, the Keeping Up With The Kardashians star finally admitted in 2015 that she’d opted for “temporary lip fillers”. 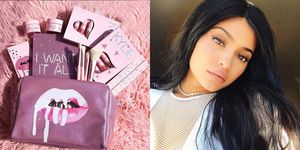 Kylie Tried to Buy Fake Kylie Cosmetics Lip Kits
Lucy Wood Contributor, MarieClaire.com Lucy Wood spends most of her time writing about celebby things, reading books, and waiting for the glorious day that she have enough millions for a pet sloth.
This content is created and maintained by a third party, and imported onto this page to help users provide their email addresses. You may be able to find more information about this and similar content at piano.io
Advertisement - Continue Reading Below
More From Beauty
A Definitive Guide to Essential Oils for Your Skin
For Sharon Chuter Self-Care Includes Champagne
Advertisement - Continue Reading Below
The Absolute Best Red Lipsticks on Earth
Our Favorite Self-Tanners for Dark Skin Tones
Top-Rated Dip Powder Nail Kits to Experiment With
Go Platinum Blonde Without Destroying Your Hair
Tried-and-Tested Skincare Products That Work
Shizu Okusa﻿ Swears by Forest Bathing
Eye Creams That Work Wonders on Puffiness
Editor-Approved: The Best No-Streak Self-Tanners