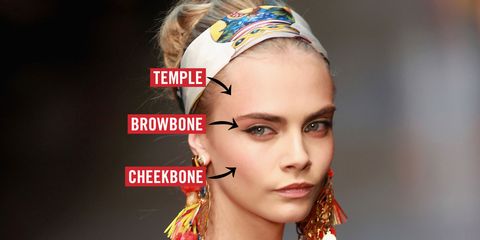 When one of fashion's preeminent makeup artists calls blush the most underrated beauty product, you make like a bobblehead and nod vigorously because she's right. (Also, because she's Pat McGrath.)

We've already studied how moving the foci of your well-diffused blush circles can help you look younger or more like a Degas dancer, so think of this as an appendix on how to change the *shape* of your face using a similar technique.

First up, the Slash and Carve, which sounds like a Jack the Ripper musical but is actually a painfully chic move they employed at Chanel haute couture.

In essence, it's the exact same motion as you would make with your usual powder or cream, just in a far riskier color: Suck in your cheekbones, and, starting very close to the ear, trace the hollow with a red-brown, lessening the pressure as you near the corners of your mouth. (Good thing we've got a GIF of this, right?) Blend until you can't tell where the edges are, put on your street clothes, take away the darkened brows, and tamp down the lip a bit, and it'll barely register as clown-like or severe.

For a more natural effect, there's this three-that-can-turn-into-four-pronged approach modeled by Cara Delevingne at Dolce & Gabbana.

Like Pat McGrath says, working a pinky-peach shade into the browbones and temples "almost like a bronzer" warms up the complexion, thins out the face a bit, and suggests you've got the circulation of a red-capped Renaissance child. It can even create the illusion of a lower hairline if you've got a "damn 5head [that] always gets in the way" à la Rihanna: Beginning at the temples, curve up and connect both sides in the middle of your fore/5head, keeping close to the edges as you continuously swirl and buff. (Check out this tutorial.) That outer shadow tricks the eye into reading it as a smaller space.