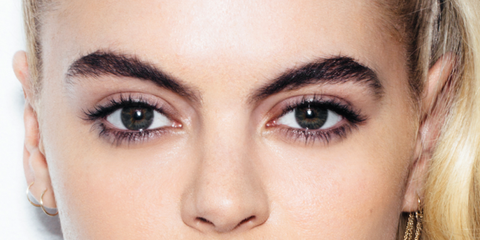 When you work on the internet, being trolled is par for the course. And while anonymous insults have never quite gotten the best of me, I do not have the ironclad ego of Donald Trump. Somewhere deep, deep inside, an offhand remark will always sting.

When I started at Marie Claire two years ago, my face became a real-life canvas for many of my beauty stories. Whether it was test-driving Audrey Hepburn's mascara trick or Beyoncé's fierce AF ponytail, some people—particularly those of the Top-Commenter-on-Facebook status—honed in on one thing and one thing only: my eyebrows.

It got to the point where I'd get actual anxiety scrolling through my Facebook feed, fearing I'd come across a fiery debate in one of our social posts (as my coworkers can attest has often happened) about my whether or not my arches were too "manly" or how "gross" they look with my bleached-blonde hair.

They're dark, bushy, wiry, and for the most part unmanicured, aside from plucked stray hairs here and there. I love them because they're my trademark.

I've written about my brows and my (long) journey to appreciating them before. They're dark, bushy, wiry, and for the most part unmanicured, aside from plucked stray hairs here and there. I love them because they're my trademark. And while I can roll with most of the punches—one commenter who pointed out their uncanny resemblance to Mr. Beans was dead on, no lie—some of them reeeeally are way harsh Tai. Particularly because 99% of those telling me to "fix" my brows are women. Don't I get some I'm-not-a-real-model realness points?

Up until recently, I'd never considered stoking the fire. (Despite the fact that literally every time it comes up, my boss is like "you should write an essay about this!") I've always just tried ignore the hate or laugh it off by sending a screenshot of whatever cruel comment to my friends because that's just the nature of my business.

But as of January 2016, I'm inspired to take a more proactive, Hi, Haters approach. This, thanks to Solange, who too has been natural brow-shamed—except she refuses to take it lying down.

As you might know, Solange is no shrinking violet when anything comes under attack in her life, whether about her family or her appearance. It's a quality I'm striving for myself. Which is why I had all the yasss-queen feels when she took to Instagram recently to address her brow-grooming-obsessed naysayers with an up-close shot of her gorgeous arches, posing an important question: How many of you will continue to say I need my eyebrows done in 2016?

Her statement was glorious in and of itself, but it was that much more validating when it spurred a stream of positivity in the comments. It became a virtually troll-free hub with followers expressing how much they appreciate her full, natural brows in all their bushy glory.

99% of those telling me to "fix" my brows are women. Don't I get some I'm-not-a-real-model realness points?

To me, it exemplified how even with just a quick iPhone snap and the press of the upload button, someone can change a conversation. Can reassure someone else that we're beautiful however we damn well please to look. And can take the power back from all the people carelessly calling things "disgusting" and "unkempt"—and give it instead to the people calling things "dope."

I do not have 1.1 million followers, nor do I bear the last name Knowles, but I'm going to subscribe to Solange's style. I'm going to do anything but stay mum on the matter of my eyebrows. Because, as I now know, fleek will never be a one-size-fits-all term.