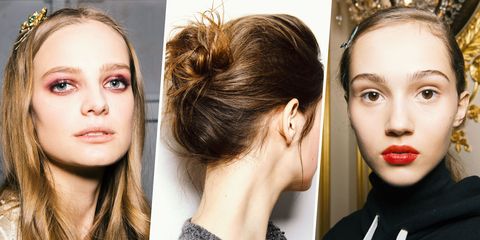 For us mere (broke) mortals, much of what we see on the NYFW runways is pure fantasy. The hair and makeup, however, don't have to be. In fact, we're always equal parts stunned and thrilled by how often designer clothes are paired with makeup and hair looks created with drugstore products. Here, find our favorite beauty steals we discovered backstage at the Fall 2017 shows.

To create the two-toned lip look at Jason Wu, makeup artist Yadim applied Maybelline's Color Sensational Vivid Matte Liquid in Orange Obsession ($7.99) to the top lip, blending it with his fingers. Then, he patted the same formula in Red Punch on the bottom lip for a color-blocked effect.

We were already obsessed with the mousse/foam trend of 2017, so of course we're all about the voluminous texture that TRESemmé global stylist Odile Gilbert created with the brand's Beauty-Full Volume Mousse ($4.99) as her base. It gave the hair body while leaving it feeling soft and natural for what would become an effortlessly-chic messy chignon.

Makeup artist Erin Parsons mixed and matched different shades of dark red pigment to create the burgundy eyes at La Perla. She began by drawing Maybelline's EyeStudio Lasting Drama Waterproof Gel Pencil in Sleek Onyx ($7.99) along the waterlines, then dabbed the Color Sensational The Loaded Bolds lipstick in Midnight Merlot ($7.49) on the center of the lids. She packed on more color by sweeping the plum shade from the 24K Nudes Eyeshadow Palette ($11.99) on the lids and added even more dimension with a final layer of Expert Wear Eyeshadow in Fierce Fuchsia ($3.99).

'90s hair is back, along with the decade's quintessential drugstore accessory: Conair's Topsy Tail. Oribe global brand ambassador James Pecis tied the hair back into a ponytail, then used the tool to pull the ponytail inside, then loop it back down again. He then repeated the motion to create a vertical bow.

The good news is that the wine-stained lips at Jonathan Simkhai can be recreated in wallet-friendly fashion. The bad news? Not until July 2017, when Maybelline unveils their Color Sensational Vivid Hot Lacquer shades "Vivid Hot" and "Classic," which makeup artist Yadim mixed together for the rich, yet high-shine color.

At Derek Lam, four different shades of Maybelline's Expert Wear Eye Shadow were used for a bespoke shadow look. The makeup artists started with "Purple Daze," applying it along the crease and up the brow bone. Then, they applied "Vanilla," Teal the Deal," and "NY Silver" together with a fluffy brush, blending for a subtly technicolor pastel eye.

Lauren Valenti Associate Web Editor I’m the associate web editor at Marie Claire.
This content is created and maintained by a third party, and imported onto this page to help users provide their email addresses. You may be able to find more information about this and similar content at piano.io
Advertisement - Continue Reading Below
More From Beauty
The Expert Guide To Microcurrent Facial Devices
"I Went From Homeless to Makeup CEO"
Advertisement - Continue Reading Below
Zara Makeup Is Here—And It's Awesome
Night Creams That Work Magic While You Sleep
Lip Stains for a Just-Picked-Berries Tint
Blonde vs. Brunette: Celebs Who Made the Switch
Collagen Powders for Radiant Skin, Hair, and Nails
My Struggle with Psoriasis Jumpstarted My Career
Highlighters for a Pre-Summer Golden Glow
Oil-Free Moisturizers That'll Never Break You Out