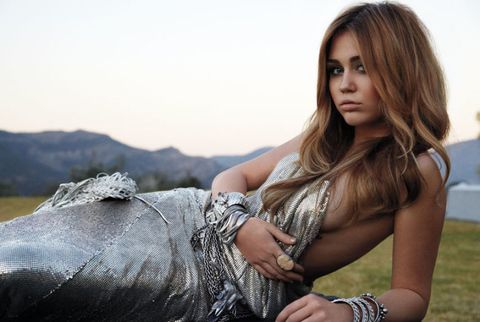 I'm inclined to give Miley Cyrus a pass on the whole bong-smoking thing. I'm inclined to think, Lord, honey, just steer clear of the cameras next time. And I tell Cyrus this when I meet her. We're down in New Orleans, where she's shooting her new comedy, So Undercover, and we're sitting in her big cozy trailer around twilight, and we've spent the day together now, so a certain level of comfort has been established. The subject of "The Bong Incident" (which, in case you have been living under a rock, involved a two-and-a-half-minute video of Cyrus smoking a bong filled with salvia, an herb sold legally in many health-food stores, posted on TMZ in December) has come up, and after she says all the things you expect her to say ("I'm not perfect ... I made a mistake ... I'm disappointed in myself for disappointing my fans ..."), I cannot help but set my journalist hat aside for a minute and say, "But do you really think it was a mistake? Obviously college kids your age all over America are smoking bongs with a lot more than salvia in them."

She looks at me with her big blue baby-doll eyes. "But they're not Miley Cyrus," she says. "They're not role models. So for me it was a bad decision, because of my fans and because of what I stand for."

I don't know what happened on your 18th birthday, but in the space of about three weeks, Disney's number-one teen princess—the highest-earning kid in America—turned 18 (aka "The Disney Death Sentence"), saw the bong video and a photo of her "makeout" with Nickelodeon star Avan Jogia spread like wildfire over the Internet, and learned that her parents, Billy Ray and Tish Cyrus, were getting divorced—possibly, the tabloids shouted, because her mom had an affair with the lead singer of Poison.

There are no paparazzi allowed in the Garden District of New Orleans, which might be why Cyrus looks so damned relaxed and happy roaming around the old plantation-style house on Jackson Avenue where they're shooting So Undercover today. (The plot: Cyrus plays a private investigator who goes undercover in a Southern sorority house to protect a mob boss's daughter and rooms with Kelly Osbourne.) There are no strange men hiding in the camellia bushes, waiting to pop out and ambush her with flashbulbs and shout, "How do you feel about your folks splitting up, Miley?" Or: "What's up with your mom and Bret Michaels?" Or: "Give us a pole dance, Miley!"

Another benefit to New Orleans: no frowning Disney executives on hand to breathe fire down Cyrus' neck about the bong incident. Or the "making out" business at her 18th birthday party. (For the record, Cyrus says: "If you look at the picture, I'm turned away, and he's kissing me on the cheek. It's very hilarious to me that people say, 'They're making out.' In making out, there's a tongue.") Here, no one will chastise her for the decidedly un-role-model-like themes on the album Can't Be Tamed that she released last year. No one is going to stick a finger in Cyrus' face and say, "Listen, kid, who do you think made you that big mountain of cash these last five years?"

In the Garden District, 18-year-old Miley Cyrus is free to be 18-year-old Miley Cyrus, a girl of high enthusiasms. What is she enthusiastic about these days? Well, there is her goal to "spread love and change the world in 2011." There are the new hot-pink Christmas lights from Target that she just strung up inside her white Chevy Suburban. There is the comedy LOL that she made earlier this year with Demi Moore, with whom she still talks to (or texts) almost every day. ("It really felt like Demi was my mom a little bit because we had such great conversations, and I feel like it shows on-screen. I can't wait for LOL to come out. It's what I'm most proud of.") There is her So Undercover costar and new friend Kelly Osbourne, whom she adores and often runs around with on the set, singing "You're the One That I Want" from Grease or "My Favorite Things" from The Sound of Music. ("We're so much alike, it's crazy.") But perhaps most of all, at the moment, Cyrus is enthusiastic about the stack of pizzas that are due to arrive on set any minute. "I don't know about y'all, but I'm starving!" Cyrus says as she comes bounding into the room on a break between takes. "Star-ving!" (An hour ago, Cyrus and Osbourne were telling me about the "amazing spinach smoothies" the cook makes for them each morning on set "because we're on a health kick." Now: pizza party!)

In person, Cyrus is tall and lean and curvy as a violin. Taller than you'd imagine. Also louder; she speaks with the bold, jokey air of someone who is used to being liked—and listened to—by every person in the room. She has a cheerleader's confidence and the laugh of a truck-stop waitress. It seems almost uncannily perfect that today the grand old Southern mansion they're shooting in has been refitted as a KKZ sorority house, because in a lot of ways Miley Cyrus resembles nothing so much as a very friendly, very popular, very hardworking sorority girl.

A sorority girl who happened to make $48 million last year.

Read the rest of Marie Claire's exclusive interview with the star in our March 2011 issue, on newsstands February 15.