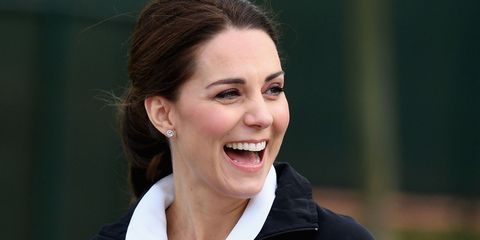 Today, the Duchess of Cambridge made her first solo appearance since announcing her third pregnancy in September, wearing a black and white tracksuit and a pair of Nikes for a morning tennis session with Tennis for Kids, an initiative which encourages children aged five to eight to play her favorite sport.

While Kate practiced her serve with the children, she also showed off her growing baby bump, weeks after being "bump-shamed" for her slim frame.

Following a chat with tennis professional Johanna Konta, the Wimbledon star said: "It was good and fun. She's lovely. It was great to see her passion for tennis and that she was here to learn about these great programs being run by the LTA."

On Court 4 The Duchess gets involved in a @wearecoachcore training session, which is being delivered by Coach Core apprentices. pic.twitter.com/98s9mdwUgp

— The Duke and Duchess of Cambridge (@KensingtonRoyal) October 31, 2017

"Every little girl and almost every boy wants to meet a princess, and it got them very excited," she added.

Related Story
Kate Middleton Reveals Due Date for Baby No. 3

The proud mother of two also took the time to pick up some tips when it comes to teaching Prince George a few skills on tennis court.

Lawn Tennis Association coach Sam Richardson revealed: "She asked what kind of stuff [Prince George] should be doing. He is interested in tennis, but being four, he just wants to whack the ball. You have to wait for them to show interest."

Kate also spoke to Judy Murray—tennis champion Andy Murray's mother—who advised her to take the racket away from George and focus on skills with her little tyke instead.

The Duchess became a patron of the LTA last December, taking over from Queen Elizabeth II, who first assumed the position 64 years earlier.

The Duchess joins in with a coaching session with Tennis for Kids Ambassador @JoKonta91. 🎾 pic.twitter.com/bl4n10OtxQ

— The Duke and Duchess of Cambridge (@KensingtonRoyal) October 31, 2017

With a third child on the way, we're sure it won't be long before the royal children are making their way onto a court to compete with mom and dad.

Katie O'Malley Deputy Digital Editor Katie O’Malley is the Deputy Digital Editor, at ELLE UK.
This content is created and maintained by a third party, and imported onto this page to help users provide their email addresses. You may be able to find more information about this and similar content at piano.io
Advertisement - Continue Reading Below
More From Celebrity
Keep an Eye on Lady Louise Windsor
Princess Beatrice's Daughter May Get a Royal Title
Advertisement - Continue Reading Below
James Middleton’s Wife Thought He Was a Waiter
Meghan Markle Got a New Nickname
Harry Said the Queen and Philip Were "Adorable"
Kate Middleton Played Tennis With Emma Raducanu
Tom Felton Collapsed on a Golf Course
Ashley Olsen Made a Rare Red Carpet Appearance
Harry Carries Briefcase That Reads "Archie's Papa"
Meghan Markle and Prince Harry Arrive in NYC