Jennifer Hudson and her fiancé David Otunga have parted ways after a ten-year relationship, though the breakup has been in the works for quite a while.

"They have been in the process of ending their relationship for a number of months," Hudson’s rep tells People. "Today, Jennifer requested and received a protective order against her ex-fiancé. Jennifer’s actions are solely taken in the best interest of their son."

Happy Birthday @iamjhud!!! I'm so blessed to be able to walk through life holding hands with an angel like you. ##HappyJHudDay

An attorney for Otunga said, "Mr. Otunga has never abused or harassed Ms. Hudson or their son, and it is unfortunate, especially in today’s climate, that she would feel the need to make these false allegations against him. Mr. Otunga looks forward to his day in court and in being awarded the residential care of the parties' only child."

The former couple have been engaged since back in 2008, and welcomed their son in 2009. 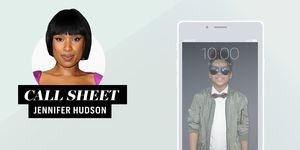 What's on Jennifer Hudson's Phone?
Mehera Bonner Contributor Mehera Bonner is a news writer who focuses on celebrities and royals—follow her on Instagram.
Advertisement - Continue Reading Below
More From Celebrity
Why Isn't Beyonce at the 2020 Grammys?
Watch Demi Lovato's Emotional Grammys Performance
Advertisement - Continue Reading Below
Beyoncé's Pre-Grammys Look
Blake and Gwen Were Too Cute at the Grammys
The Jonas Brothers' Grammys Performance Was a Lot
Alicia Keys Covers 'Someone You Loved'
Lizzo Opens the Grammys With an Epic Performance
Chrissy and John Win Best Dressed at the Grammys
Sophie Turner Stuns In a Gothic Look
Ariana Grande Is a Disney Princess at the Grammys