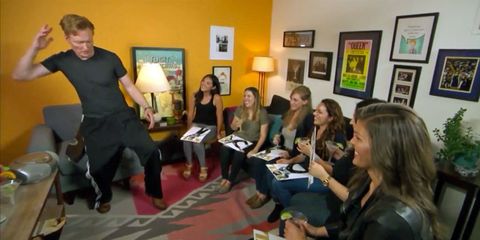 You've got all your girlfriends gathered, the cocktails are in full supply, and you're about to ogle watch Channing Tatum flash his chiseled six-pack on screen. Sounds like a fun night, right? Apparently Conan O'Brien thought so, too.

The late night host crashed the party where a few of his female colleagues were catching a midnight screening of the new film Magic Mike XXL. He (sort of) fit right in, joining in the debate of which actor is hottest and why before getting the lowdown from the girls on how to dance like a male stripper. The real *magic* happens at the 4:45 marker—complete with rip-away pants, ab exposure, and pelvic thrusts against the floor. Watch Conan O'Brien bump and grind in the video below.