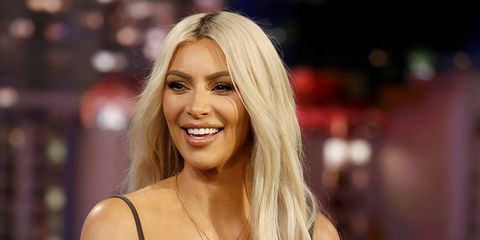 In case you've been living under a rock, Kim Kardashian and Kanye West have welcomed their third child, via surrogate. Kim posted the news on her website (and Twitter) on January 16, with a simple message: "She's here."

Later that day, Kim tweeted a picture of herself captioned, "#momofthree"—just in case anyone missed the very subtle identity of the "she" in "she's here."

She also shared the image on Instagram, for good measure.

Kim has not, however, shared any pictures of her new daughter or revealed what she and Kanye have named the baby. Since the couple has a reputation for creative baby names (their first and second children are named North West and Saint West, respectively), people are understandably interested.

That's probably why many fans are interpreting Kim's latest Instagram, a close up shot of a Louis Vuitton bag, as a clue about the baby's name.

According to People, some of the most popular guesses include "Elle V West," "LV West," and "Louis West." Livy is another popular guess based on the Louis Vuitton post.

Some fans aren't convinced though and maintain that they expect the baby to be named Donda, after Kanye's mother, who passed away in 2007. The couple have publicly maintained that they haven't picked a name yet. However, when a paparazzo suggested "Donda" while snapping pictures of him outside of his Calabasas, California office, Kanye said, "that's fire," according to TMZ.

It's also possible that the name will be some combination of the two—or something completely different and that the Kardashians are just trolling us (again).