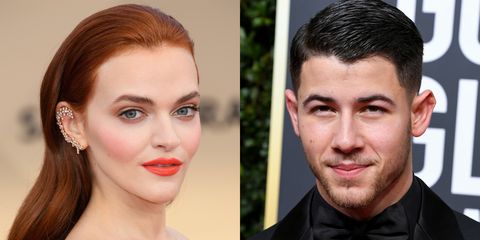 The Handmaid's Tale actress Madeline Brewer lit up the corner of the internet that's obsessed with the Jonas Brothers (it's a big corner) when she was spotted eating dinner in Santa Monica with Nick.

Naturally, the meal (which took place after the Critics' Choice Awards) lead to speculation about their relationship status, and Brewer was asked point-blank whether she's dating the youngest musician brother while walking the SAG Awards red carpet.

Fans went crazy after @madkbrew and Nick Jonas were spotted eating dinner together, but she sets the record straight for us. #SAGawards pic.twitter.com/IROznfAEAI

In response to Keltie Knight of ET saying, "What's happening? Are you dating Nick or what? Brewer replied, "No! No! We, we, ate food across from each other." When told that in Hollywood that's considered a date, Brewer responded, "I guess so, I guess so, he's a nice guy. We're friends. He's adorable, yeah. I mean, that's objectively, he's a cute guy."

The pair were photographed on their not-date, and you can see said photos right this way.

Related Story
Alison Brie on Brother-in-Law James Franco
Mehera Bonner Contributor Mehera Bonner is a news writer who focuses on celebrities and royals.
This content is created and maintained by a third party, and imported onto this page to help users provide their email addresses. You may be able to find more information about this and similar content at piano.io
Advertisement - Continue Reading Below
More From Celebrity
Beyoncé Stuns in a Mesh Dress With Matching Gloves
Lizzo and Chris Evans Had the Best IG Interaction
Advertisement - Continue Reading Below
Travis Shared PDA-Heavy Bday Tribute to Kourtney
How the Queen Ends Awkwardly-Long Handshakes
The Queen Has a Rule Against Bad Talking Family
The Queen Took a Pic of Philip With Her to Funeral
The Queen's Tolerance Was the Key to Her Marriage
J.Lo "Likes" Shady IG Post After A-Rod Split 👀
Beyoncé Shares Photos of Her White Power Suit
Will & Kate Welcomed Harry Back Into Their Group