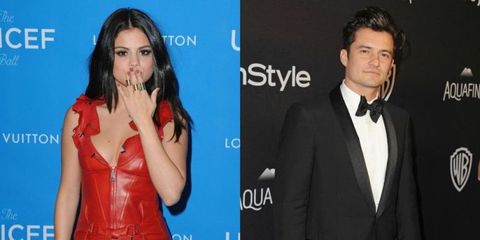 Selena Gomez shared a sweet message to her longtime friend Orlando Bloom on Instagram as she celebrated alongside him at his birthday party.

Happy bday Orly -celebrate kindness and who you are

"Happy bday Orly—celebrate kindness and who you are," she wrote. (She calls him "Orly." How perfect is that?)

People reports at the actor's bash, Bloom's manager also shared an adorable photo of the pair cuddling up together during the party (which is probably going to fuel a lot of speculating about the real nature of their relationship). So does all this lovey-dovey affection and fawning mean they could be the next big couple? Probably not, only because the evidence at this point is pretty damn flimsy. But that shouldn't stop you (OK just me) from shipping them in your celebrity couple dreams.

Before you go too far down this hookup what-if rabbit hole, Selena was also recently photographed with Orly's ex Miranda Kerr at the 6th Biennial UNICEF Ball. So maybe they're all just close friends?

We're joining @UNICEF and @louisvuitton to #makeapromise to raise funds and awareness for children in need around the world. Visit www.louisvuitton.com/lvforunicef to donate and learn more ❤️🙏🏻 @selenagomez

But wait, there's more (maybe)! Don't forget, way back in 2014, Orlando got into a very public fight with Justin Bieber, reportedly over the Biebs' rumored involvement with Miranda. And knowing what a hard time Justin is having letting go of Selena—well, let's just say things could get interesting.

Rebecca Rose Writer I'm a writer for Cosmopolitan.com manning the fort during the night shift (because I love staying up late and hate getting up early in the morning).
Advertisement - Continue Reading Below
More From Celebrity
Meghan's Estranged Dad Throws Shade at Royal Exit
Watch the First Trailer for Kim's New Documentary
Advertisement - Continue Reading Below
The Queen Looks Genuinely Happy Amid Sussex Exit
Brad & Angelina Are Releasing a New Wine Together
The Royal Exit News Has Made Harry Happy Again
The Future of Harry & Meghan's Sussex Royal Brand
Sussexes Announce Plans to Move to North America
Queen Says She's "Particularly Proud" of Meghan
Meghan and Harry Will Still Live at Frogmore
How Meghan Markle and Prince Harry Will Make Money