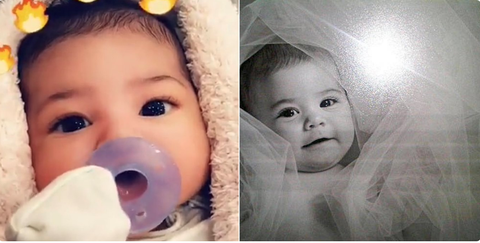 This weekend, the internet practically lost its collective mind when Travis Scott Instagrammed a screenshot of a picture of he and Kylie Jenner's daughter Stormi's face. The cutest of cute lil' pics, complete with a Snapchat filter (because Kylie posted it on Snap first), is the couple's "little rager" according to Scott's caption.

BUT, one very smart person was quick to point out something kind of snarky but also important. Twitter sage @KyJennerWorld wrote "why does stormi look more like kylie than kylie did lol."

And, look, this is a very valid point. How is it possible that Stormi looks like Kylie as Kylie looks today, when that's not... how she used to look?! For example, they both have perfectly long eyelashes and cheeks that look perfectly filled. Theoretically or, you know, given genetics, shouldn't she look just like Kylie did as a baby? Here's a pic of Kylie as a child for comparison.

Like, Stormi looks more like present-day Kylie than even Kylie herself did as a baby. And seriously, how is that possible?! The funnier part is that Kylie had tweeted previously that Stormi looked "just like me when I was a baby" which is simply not true.

she’s good 😊 still staring at her all day. she looks just like me when i was a baby 😊 https://t.co/fEFsSeNO6Z

All I'm saying is that it takes one hell of a Snapchat filter to defy genetics. Well done, internet. Well done.

Emma Baty Emma Baty is the Associate Entertainment Editor at Cosmopolitan who focuses on movies and TV.
This content is created and maintained by a third party, and imported onto this page to help users provide their email addresses. You may be able to find more information about this and similar content at piano.io
Advertisement - Continue Reading Below
More From Celebrity
Blake Lively Reacts to Gossip Girl's Identity
Harry Said He Didn't Understand Unconscious Bias
Advertisement - Continue Reading Below
Joe Jonas Took a Stroll With Daughter Willa
Lizzo Stuns With Bright Red Hair and Bangs
William and Kate Are Hiring a Live-In Staff Member
Gigi Hadid Says She Voted With Her BB
Will Asked His Uncle to Talk to Harry About Meghan
Why the Queen Denied Meghan's Wedding Tiara Pick
Will & Harry's Reactions to Their Parents' Divorce
LOL, Kelly Ripa Comments on Her Hubby's Bulge 🍆