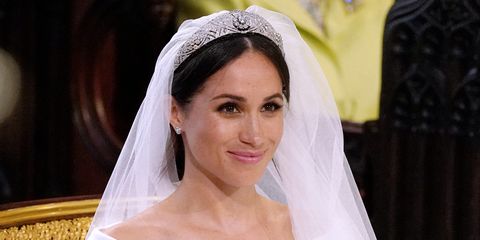 Update 5/19: Meghan is wearing Queen Mary's Sapphire Bandeau. The new Duchess of Sussex was spotted in the jewel en route to the royal wedding with her mother, Doria Ragland. See how it compares to Kate Middleton and Princess Diana's here.

Original story 3/12: Meghan Markle's wedding to Prince Harry is coming up, and chances are she'll walk down the aisle wearing a tiara (casual), as Kate Middleton did before her. Kate famously wore the Halo Tiara—given to the Queen Mother by her husband prior to his coronation—and it seems likely that Meghan will also pick a headpiece with a strong royal lineage.

The thing is, the royals have a plethora of tiaras for Meghan to choose from, so we spoke with expert Grant Mobley—renowned gemologist and Director at Pluczenik, one of the world’s leading diamantaires—to find out which piece Meghan is most likely to pick.

"Thanks to a long-time tradition, you will not see Meghan Markle wearing a diamond tiara until she is walking down the aisle to meet Prince Harry," Mobley told us. "The big question is, with such a vast assortment of stunning tiaras from the royal collection, which are we most likely to see her wearing?"

"This is my top pick for Miss Markle to wear on her big day," Mobley says of the Strathmore Rose Tiara. "Although fairly simple compared to many royal tiaras, in my eyes this is one of the most elegant and beautiful in existence, and is also very on-trend in its design."

The tiara was made in the 19th century and given to the Queen Mother by her parents as a wedding gift, before later being gifted to Queen Elizabeth II. "It has only been seen worn by the Queen Mother in her early days and has yet to be seen worn since," Mobley explains. "It would be a great choice for Meghan because it hasn’t been worn in such a long time, thus tying it to her in the modern age. Since it hasn’t been used in decades, it could be on long-term loan to her and be a staple in her collection going forward."

Another possibility is the Cambridge Lover's Knot Tiara, a piece that should be very familiar to people who love the royals. "This was a favorite of Princess Diana's and was one of the most iconic pieces she wore, thus it would mean a great deal to the couple," Mobley says. "It is made from over 100 carats of amazing white round diamonds, so it's easy to see why this might be a top contender for Meghan since diamonds have been a declaration of true love for centuries, making it a great option for what will be one of the most meaningful days of her life."

The tiara was originally made for Queen Mary by royal jewelers House of Garrard in the early 1900s before being passed to Queen Elizabeth—but it's actually a replica. "It is a remake of a much older tiara made for Queen Mary's grandmother, Princess Augusta of Hesse, the Duchess of Cambridge," Mobley explains. "The original tiara was sold at auction at Christie’s in Geneva in 1981 for more than $747,000 in today’s dollars."

While it's true that Kate has already been seen in the tiara, that doesn't mean Meghan can't wear it for her wedding.

Kate Middleton has also been seen wearing the Lotus Flower Tiara, which originally belonged to the Queen Mother, and was made from a necklace gifted by her husband. It's more modern style is a natural fit for Meghan:

"The design of this tiara is certainly trendier at the moment and would fit Miss Markle's style more than other options," Mobley says. "The tiara is actually quite modern in its design—it can be worn low on the forehead or high on the head similar to tiaras made today. The design was made with all-round white diamonds in bezel settings and a few white pearls. The total carat weight of the diamonds would be less than the Cambridge Lover's Knot tiara, but would still be of amazing quality. Although this choice may not be as sentimental as some other options, it would be on trend while still offering sheer beauty, elegance, and amazing history. That is one the many amazing attributes of diamonds—due to their resilience and hardiness , they will maintain their quality and value regardless of how old they get."

FYI, Mobley says it's also possible that Megan will get a custom tiara made for the event, which would break the royal family's tradition of "passing down valuable diamond jewelry to be worn on special occasions," but would "most certainly be a statement piece that would go down in history."

Related Story
Your Official Guide to Meghan and Harry's Wedding
Mehera Bonner Contributor Mehera Bonner is a news writer who focuses on celebrities and royals.
Rachel Epstein Editor Rachel Epstein is an editor at Marie Claire, where she writes and edits culture, politics, and lifestyle stories ranging from op-eds to profiles to ambitious packages.
This content is created and maintained by a third party, and imported onto this page to help users provide their email addresses. You may be able to find more information about this and similar content at piano.io
Advertisement - Continue Reading Below
More From The Ultimate Guide to the Royal Family
How Meghan & Harry Spent Their 2-Year Anniversary
Charlotte Has Two Major Milestones Coming Up
Advertisement - Continue Reading Below
Kate Made a Very Common Shoe Shopping Mistake
The Queen Is Lawyering Up, Apparently
Harry & Meghan Are Still Close to the Queen, TYVM
Archie Inspired Harry and Meghan to Take a Stand
Harry & Meghan Had a Hard Time Leaving Royal Life
See Will & Kate's Note About Prince Philip's Death
Kate Refused to Let George Pet a Marsupial in 2014
Charles Talked Will Out of Dropping Out of College