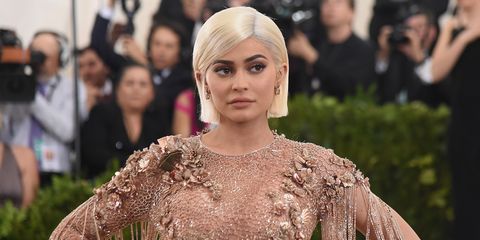 Now that Kylie Jenner's pregnancy, and the subsequent birth of Stormi, is no longer a secret, we're gradually finding out more and more details about the makeup mogul's new life as a mom. And apparently, since giving birth, Jenner has become a total "germaphobe" and is extremely strict about who she allows to visit Stormi.

According to a new report in Us Weekly, an insider has revealed that if your want to see Stormi, "You have to go to her house to visit. She’s being very careful about keeping the baby healthy and indoors."

Considering the fact that Jenner managed to keep her entire pregnancy pretty much a secret from the whole world, it's hardly surprising that she's keeping Stormi safe and under wraps, too.

Us Weekly also writes that Jenner keeps a "very strict guest list" when it comes to Stormi's visitors, and that she's "devoted to keeping her little girl safe and happy in her private space, which includes a $4,200 Vetro Lucite crib, a hand-me-down from sister Kim Kardashian."

Stormi was born on February 1, 2018, and Jenner announced her birth three days later by releasing a video compilation that documented her pregnancy journey. Jenner also posted an emotional Instagram statement explaining why she'd gone into hiding while pregnant.

Since announcing Stormi's birth, Jenner has made a return to the public eye. In addition to launching an extensive Kylie Cosmetics collection called the Weather Collection, inspired by baby Stormi, Jenner has attended several events, including Khloé Kardashian's baby shower.