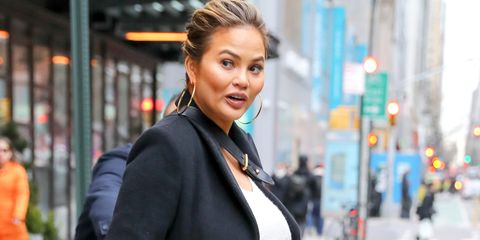 If you've ever doubted the kindness of strangers, Chrissy Teigen is here to change your mind. The pregnant model and cookbook author was in New York when she decided to step off of the sidewalk without checking the traffic first. Big mistake.

Luckily, a chivalrous stranger was there to stop her from getting run over, and for that she is eternally grateful.

There happen to be photos of the entire incident, as it occurred, but the internet read them all wrong to begin with, as one fan tweeted Teigen, "What a creeper... where is your security." It does kind of look like an overzealous fan is trying to get Teigen's attention:

But Teigen quickly corrected the mistake, replying, "Nah he actually saved me from getting run over by a cyclist. I should have looked before stepping out!" Basically, this man is a literal angel, and stopped a pregnant woman from getting run down in New York traffic. Thank you kind stranger!

When she realized, the model seemed to be in total shock:

But after being saved, Teigen continued her day as if nothing had happened:

Teigen announced her second pregnancy in November 2017, in a super cute Instagram video in which her daughter Luna mentions that there's a baby in mommy's tummy. In typically hilarious fashion, Teigen captioned the clip, "It's John's," as if there was ever any doubt.

John Legend and Teigen revealed that Luna's first sibling will be a baby brother, as "that is the embryo we have left." They've always been extremely open about using IVF, and are clearly excited to expand their family.

Related Story
Chrissy Teigen Was Shaded By Luna at Disneyland
Amy Mackelden Amy Mackelden is a freelance writer, editor, and disability activist.
This content is created and maintained by a third party, and imported onto this page to help users provide their email addresses. You may be able to find more information about this and similar content at piano.io
Advertisement - Continue Reading Below
More From Celebrity
The Queen Was by Prince Philip's Side When He Died
Prince Harry Is "Really Upset" Over Philip's Death
Advertisement - Continue Reading Below
Will Harry & Meg Attend Prince Philip's Funeral?
The Queen Is Hopeful Prince Harry Will Return Home
Prince Charles Visits the Queen at Windsor Castle
Harry & Meghan React to Prince Philip's Death
Prince Philip Will Not Have a State Funeral
What 'The Crown' Got Wrong about Prince Philip
Touching Things Queen Has Said About Prince Philip
Your Guide to the Current Royal Line of Succession