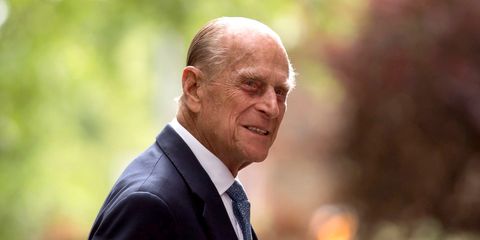 Just over a week ago, it was revealed that Prince Philip had been forced to cancel a rare public engagement as he was feeling unwell. And today, the Queen's husband was noticeably absent from the royal family's Easter celebration.

Related Story
What 'The Crown' Got Wrong about Prince Philip

According to the Evening Standard, Prince Philip has been "experiencing some trouble with his hip," which is why he has been forced to miss his recent royal engagements. The Queen's 96-year-old husband is usually active in public life, so his presence from the Easter church service is sorely missed.

Hello! previously reported that Prince Philip had been "expected to attend a ceremony at Windsor Castle... to formally hand over his role as Colonel of the Grenadier Guards to his son, Prince Andrew," but he canceled the appearance because of his health issues.

Of course, Prince Philip officially stepped down from his public duties last summer, but is still known to attend public events with Queen Elizabeth II.

The Express reported that Prince Philip had been due to attend the Easter church service, along with members of his family including Prince William and Kate Middleton. The Express said, "According to a Buckingham Palace spokesperson the Duke of Edinburgh’s name was printed in the Order of Service 'weeks ago when it was hoped the Duke would be able to take part.'" Unfortunately, a spokesperson for the royal family said, "His Royal Highness has since decided not to attend."

Related Story
The Queen and Prince Philip's Marriage Timeline
Amy Mackelden Amy Mackelden is a freelance writer, editor, and disability activist.
This content is created and maintained by a third party, and imported onto this page to help users provide their email addresses. You may be able to find more information about this and similar content at piano.io
Advertisement - Continue Reading Below
More From The Ultimate Guide to the Royal Family
Will and Kate Attend the ‘No Time to Die’ Premiere
Harry Carries Briefcase That Reads "Archie's Papa"
Advertisement - Continue Reading Below
Meghan Markle and Prince Harry Arrive in NYC
Princess Beatrice Reveals Daughter's Name
How Meghan & Harry Spent Their 2-Year Anniversary
Charlotte Has Two Major Milestones Coming Up
Kate Made a Very Common Shoe Shopping Mistake
The Queen Is Lawyering Up, Apparently
Harry & Meghan Are Still Close to the Queen, TYVM
Archie Inspired Harry and Meghan to Take a Stand