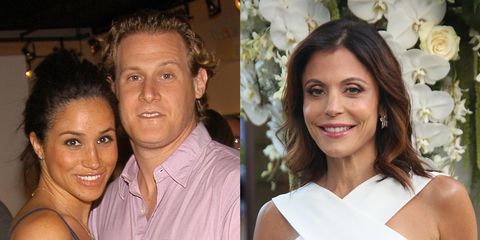 Not only did Frankel once date Engelson, but they still have a working relationship and plan to make a TV show together. While this union has caught me by surprise, Frankel has the most hilarious story about how she found out about Engelson's ex-wife, which will brighten everyone's day.

In an interview on Australia’s Kyle and Jackie O Show (via Us Weekly) on Monday, Frankel revealed, "I met this guy as a romantic interest. His name is Trevor."

"I met him in Chicago and we were supposed to go out, and I ended up seeing him one time and he'd been texting me. He's a producer in L.A. He told me that he was married before. He’s divorced [now]. He was married to this girl named Meghan Markle from the TV show 'Suits'."

Of course, when Frankel found out that Markle was going to marry Prince Harry, she freaked out, and asked Engelson, "Holy shit! Your ex is going to be a princess. Is that crazy?" which should probably be on a list of questions *not* to ask a person whose ex is getting remarried.

And while Frankel and Engelson aren't currently dating, they're fostering a working relationship which could lead to new projects. Frankel revealed, "He pitched me a TV show idea to produce together about a bunch of businesswomen, which I think we are going to do."

As for whether or not they might have a romantic future together, Frankel told the Kyle and Jackie O Show hosts, "He looks a little bit like my ex which scares me," which is obviously never a good sign.

But as for the future, she doesn't know: "We bypassed the romantics and went into the business. But I don't know, there’s something there. There's something salacious about doing a TV project with Meghan Markle's ex." So, there you have it.

Related Story
Who Is Meghan Markle's Ex-Husband?
Amy Mackelden Weekend Editor Amy Mackelden is the Weekend Editor at HarpersBAZAAR.com, where she writes about entertainment, celebrity news, beauty, and fashion.
This content is created and maintained by a third party, and imported onto this page to help users provide their email addresses. You may be able to find more information about this and similar content at piano.io
Advertisement - Continue Reading Below
More From Celebrity
The Royals Refused to Fact Check 'The Crown'
Charles' Friend Says 'The Crown' Is Propaganda
Advertisement - Continue Reading Below
Peacock Apologizes for Selena Gomez Kidney Joke
Jessica Mulroney Says Meghan FaceTimes Her A Lot
Kate Might Be Wearing This Gucci Blouse Backwards
Gigi Hadid Kisses Her Baby Girl's Head in New Pic
Kate Middleton Wears an Oversized Barbour Jacket
J.Lo's New Song "In the Morning" Is Sexy AF
The Queen Has Launched Her Own Gin
How Celebs Are Celebrating Thanksgiving This Year