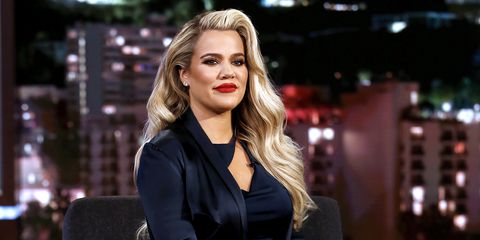 This week, Khloé Kardashian gave birth to her first child with boyfriend Tristan Thompson. The otherwise happy occasion was marked by reports of infidelity on Tristan's part, with several videos leaking that appeared to show Tristan kissing and being intimate with other women while he was involved with Khloé.

While the news of Tristan's alleged affairs came as a shock to fans, some are now saying that maybe it shouldn't have. Last year, Khloé appeared on E!'s Hollywood Medium with Tyler Henry and he kind of, sort of predicted her and Tristan's current drama.

During the reading, Tyler told Khloé very directly that her love life was not "peaking" at the moment (meaning he didn't think her current relationship represented the best of what her love life would eventually have to offer) and referenced physical distance between her and her partner posing a potential issue.

We are ready whenever you are little mama 🦋

"For you, I really am feeling like love life is not the area right now that is reaching its peak," he says. "So one of the challenges that's coming through is a referral of ultimately being distanced but in a physical sense. What comes through is literally, I'm seeing a clock...and it's symbolic for basically saying that a schedule, or two people's schedules, would not be ideal for a cohesive relationship. If we have two individuals who are both very driven, doing their own things, the feeling is, we want to ensure we have enough time for a relationship to be able to have that and that can be a challenge if two people are motivated and are not necessarily always together physically with where they're going."

Khloé confirmed that she was seeing someone and that the relationship did involve some distance—Tristan is based in Cleveland and Khloé has split her time between Ohio and Los Angeles since they started seeing each other.

FBF to one of my favorite days with all of my favorite people... my surprise party 🎉 man, everyone was sooooo good at keeping that secret! Hrush, Jen and Tristan were so calm, cool and collected during glam 👀 I need to watch you sneaks lol That was such an epic night!

"I would say, for the current situation, so long as we can make sure distance does not end up being an issue, we're fine," he said.

Welllllp...so much for that. Watch the full clip of the reading below: