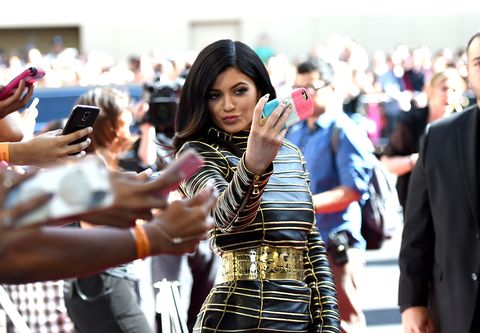 Kylie Jenner has a lot of jobs. She's a reality star, a beauty mogul, and, sometimes at least, a model. Doing photo shoots comes with the territory of being Kylie and, while Kylie is a total pro, she also knows how to make work fun. These Instagram Stories videos from behind the scenes of a recent photo shoot are proof of that.

The fun went down at a cosmetics shoot, where Kylie modeled several lip shades, including Grape Soda and Ironic, according to the Daily Mail.

Kylie spent some time being the epitome of professionalism, posing with a short, black bob and wearing a very tight black and red ensemble:

Kylie pulled down the sleeves on her top, creating a naked look for the closeup shots of the makeup.

But, you know what they say about all work and no play, so Kylie also had some fun on set. In one just-barely-silly Instagram Story video, she blows kisses at the camera while her face is covered in red, cartoon arrows, courtesy of a filter.

In another, she shows off the same filter (which must be a current fave) and waves with one hand while holding her top up with the other—preventing a wardrobe malfunction is priority one, obviously.

Finally, in a video in which she models the Grape Soda shade, Kylie cracked up while using the giant lips filter. It's another filter she's favored lately—she also used it in videos previewing the shades in her Kourt x Kylie collection with sister Kourtney Kardashian.

And, just for good measure, here's a professional-level shot of Kylie with a cat filter, because why not?