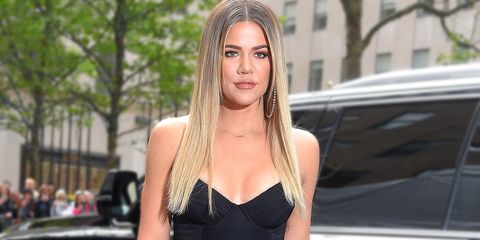 Two weeks ago, Khloé Kardashian's life changed in several big ways all at once. First, videos surfaced that appeared to show Khloé's boyfriend (and the father of her then-unborn baby) cheating on her multiple times with multiple women over the course of her pregnancy.

Days later, Khloé gave birth to her daughter, True Thompson. That is a lot to deal with, even for a used-to-the-spotlight pro like Khloé. Since then, the burning question for everyone who feels invested in this story has been: What will Khloé do next?

Our little girl, True Thompson, has completely stolen our hearts and we are overwhelmed with LOVE. Such a blessing to welcome this angel into the family! Mommy and Daddy loooooove you True!

While some reports had her planning to stay in Cleveland with Tristan, others had her buying thousands of dollars worth of baby travel gear—which may have hinted at an impending move. Yesterday, Khloé posted a cryptic message about happiness that many fans took as a hint that she plans to stay in Ohio after all.

Sources close to Khloé say she is definitely not in denial about the situation though, whatever choice she makes.

"She's not in a bubble of denial," a source told ET Online. "She knows what's going on and is still trying to process it, but so far, she's managed to move past it and look forward."

Even though she isn't in denial, it also sounds like Khloé is sick of hearing more bad news at the moment.

We are ready whenever you are little mama 🦋

"If a friend tells Khloé that they heard about another cheating story, they risk being cut off by her," the source said. "She's stuck by her man in the past, so it doesn't even seem worth it to fill her in on all the details."

The source added that Khloé feels "very settled" in Cleveland and has no immediate plans to move. That could change, of course, as Khloé continues to process the whole ordeal.

Kayleigh Roberts Contributor Kayleigh Roberts is the weekend editor at Marie Claire, covering celebrity and entertainment news, from actual royals like Kate Middleton and Meghan Markle to Hollywood royalty, like Katie Holmes and Chrissy Teigen.
Advertisement - Continue Reading Below
More From Celebrity
Kanye West Leaves Kim Kardashian in an Elevator
Channing Tatum Is "Happy" for Jenna Dewan
Advertisement - Continue Reading Below
Inside Chrissy Teigen and John Legend’s Home
A Look at Royal Family Portraits Through the Years
Are The Weeknd's 'After Hours' Lyrics About Bella?
Kendall and Harry Had a Moment At the Brit Awards
Dwyane Wade on Getting Zaya's Pronouns Right
Harry Styles' Diana-Inspired Brit Awards Outfits
Jenna Dewan and Steve Kazee Are Engaged
Kim Seemingly Tried to Kiss Kanye on a Kiss Cam