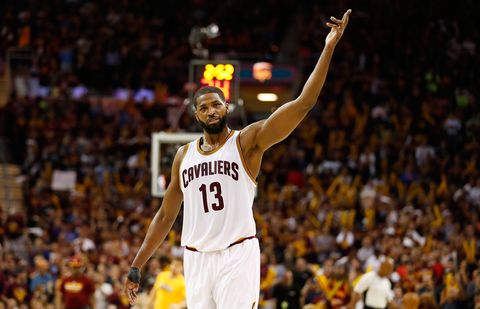 Just days before Khloé Kardashian gave birth to her and boyfriend Tristan Thompson's daughter True, allegations surfaced that the NBA player had been cheating on the reality star. With multiple women. Throughout pretty much the entire duration of her pregnancy.

Not surprisingly, nearly everyone on the planet was Team Khloé. Although neither Khloé nor Tristan have addressed the scandal directly, Tristan did finally break his social media silence with his first Instagram post since the allegations.

So what was it, you ask? An apology to the mother of his child? A touching tribute welcoming his daughter to the world? A denial of the allegations against him?

Nope. It was a post celebrating the Cleveland Cavaliers' win Sunday night.

WHAT AN ATMOSPHERE IN THE Q!! GREAT WIN #OnToTheNextOne

"WHAT AN ATMOSPHERE IN THE Q!! GREAT WIN #OnToTheNextOne," Tristan captioned the photo of him on the court. Some commenters dragged the player (of basketball, definitely, and of women, allegedly) for his hashtag in the comments.

A user going by the name "kokosdaughtertrue" really went in.

In general, the comments on the post are a mix of "go sports" (slash "why won't these people who don't care about sports leave this sports man alone?") and a whole range of pro-Khloé sentiments (calls for an apology, requests for updates on True, etc.).

Khloé, for her part, has been moderately active on social media since True's birth, even though she has yet to address the cheating scandal. On April 16, she shared a post revealing True's name and welcoming her daughter to the world.

Our little girl, True Thompson, has completely stolen our hearts and we are overwhelmed with LOVE. Such a blessing to welcome this angel into the family! Mommy and Daddy loooooove you True!

And on April 18, she posted in honor Kourtney Kardashian's birthday.

Happy birthday @kourtneykardash!!!! In any lifetime I would have found a way to have you in my life forever! I can’t imagine life without you! Have the best birthday!! You deserve everything and more! Forever and always I love you!!!

She's also been updating her Instagram Story regularly, usually to promote her app, but occasionally with more cryptic messages.

Most updates on the situation have come from unnamed sources speaking to gossip magazines, but Kim Kardashian did address the scandal directly in her new interview with Ellen DeGeneres.