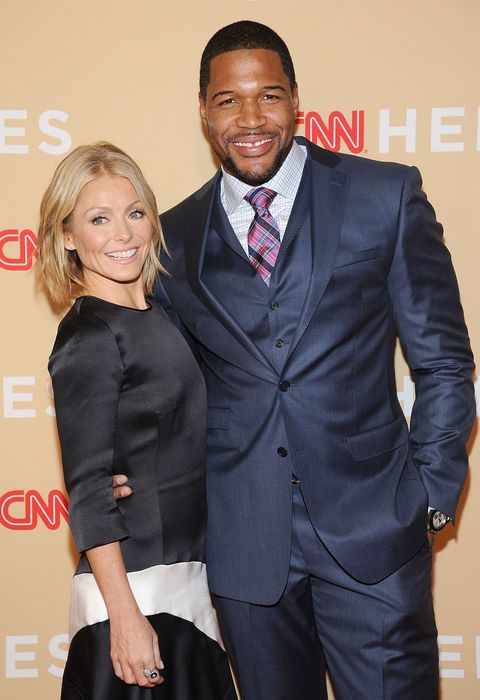 Kelly Ripa made her grand entrance this morning holding her co-host Michael Strahan's hand. The crowd cheered, giving her a standing ovation. Ripa didn't waste any time addressing all of the controversy surrounding her absence from the show after it was announced that Strahan is jumping ship to Good Morning America.

"Guys, guys, our long national nightmare is over. Please sit down. Look I am going to be completely honest. I  am certain that there are trained professional snipers with tranquilizer darts in case I drift too far off message," she began. "I want to sincerely thank you for welcoming me back to this show. The love, the show of support through his bizarre time has been really overwhelming. I needed a couple of days to collect my thoughts. After 26 years with this company, I earned the right. And, let's be honest, half of you called in sick to be here, so we get each other!

"In that time, I gained perspective. I always speak from the heart. I didn't want to come out here and say something I might regret. What transpired though, over the course of a few days, has been extraordinary, in the sense that it started a much greater conversation about communication and consideration and, most importantly, respect in the workplace.

"Since we're being honest, I don't consider this just a workplace; This is my second home. This is a place I've devoted myself to not just because of you, our loyal viewers, but because of all of the producers and the crew that work on this show. We have an incredible team. We are incredibly devoted to one another. We are family.

"Apologies have been made. The best thing to come out of this is our parent company has assured me that Live is a priority."

Then, she addressed her co-host: "I am thrilled for Michael. This is a tremendous opportunity. I couldn't be prouder of you and everything we accomplished together." she said, adding: "My dad, who was a bus driver for 30 years, thinks we're all crazy. And I think he's right!"

When she walked over to join Strahan, he told her: "I'm so happy you're back. One thing I know about you: You love the show, you love the fans, you love the staff. I love you. You brought me here. And this show has been transforming to me. I know this show lives on because you are the queen of morning TV."

According to New York Post gossip column Page Six, Ripa and Strahan didn't talk before filming the show but "did exchange some cordial texts."

And reportedly, it wasn't Strahan Ripa was angry with—it was the execs who negotiated Strahan's move to another network show for months behind her back. They reportedly didn't tell Ripa that Strahan was leaving Live until right after filming the show last Tuesday, which was less than an hour before the news broke in the press.

"ABC execs have gone out of their way to make up for it. Ben Sherwood [president of Disney-ABC TV] did reach out and personally apologize and stress their commitment to Kelly and the show," a source told the outlet. They added that Ripa's comments were not vetted before she went on air. "What she wants to say has not been submitted for approval."

Good for Ripa for demanding the respect she deserves.

Kate Storey Senior Staff Writer Kate is a writer for Esquire covering culture, politics, style, and lifestyle.
Advertisement - Continue Reading Below
More From Celebrity
Prince Harry and Meghan Markle's 53 Cutest Moments
RiRi Was Shocked by the Reaction to Fenty Beauty
Advertisement - Continue Reading Below
Behold: Celebrities Who Dated Normals
Kate Middleton & Michelle Obama Use This $64 Cream
A Full Timeline of Tyler C. & Hannah B.
Blake and Ryan Donate $400K to NY Hospitals
Prince William May Work as an Air Ambulance Pilot
Harry Is Likely to Get U.S. Diplomatic Status
Harry Was Forced to Give Up His Military Titles
Ariana Grande Revealed Her Natural Curls