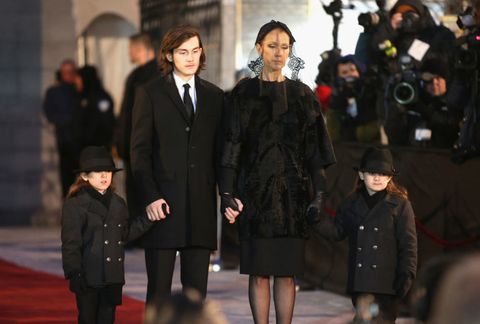 When Celine Dion's husband, René Angélil, died this past January at 73, she not only had to mourn on her own, but she also had to start over as both a performer and a mother. René was not only the love of her life, but also her manager and anchor of their family.

In an emotional interview with Good Morning America, Dion explained what happened immediately after he succumbed to throat cancer. After he passed away, she put a robe on him and laid down next to him in bed. She talked to him about how he had to "leave in peace" because he spent his life worrying about her and their family.

Then, she had to explain what happened to their children, 5-year-olds Nelson and Eddy and 15-year-old René-Charles."I said, 'Do you remember the movie Up?' It's one of our favorites," she said. "I said, you know, today, Papa went up. Because Papa was very sick. […] Up is is a good thing. Up is uplifting. We're going to celebrate this right now because Papa is no longer in pain."

She took her kids to the yard before it got dark, sprinkled "pixie dust" and "balloons" and tell Papa to "have a good Up."

Dion also appears on the cover of People this week, and talked to the magazine about moving on after tragedy. "René always insisted the show must go on," she said. "You know what, I'm 48 years old and I lost the love of my life. I miss him a lot from when he was great but not when he was suffering. I cannot be selfish. You have to let people go. I feel at peace."

In the end, she wants to put on a brave face for her kids. "I really, really want to prove to my kids their mother is strong," she said. She'll be making her first television performance on Sunday's Billboard Music Awards, singing the aptly titled Queen song, "The Show Must Go On."

This content is created and maintained by a third party, and imported onto this page to help users provide their email addresses. You may be able to find more information about this and similar content at piano.io
Advertisement - Continue Reading Below
More From Celebrity
Celebrities Are Paying Tribute to RBG
Harry Plans to Fly Archie Around in a Helicopter
Advertisement - Continue Reading Below
Harry & Meghan's Speaking Demands Could Cost Them
Yolanda Hadid Hugs Gigi Hadid's Baby Bump
Will & Kate Skipped Harry's Birthday Zoom Call
Miley Cyrus Poses in a Sheer Mugler Bodysuit
Katie Holmes & Emilio Vitolo Share *Serious* PDA
Why Harry & Meghan Signed Their Netflix Deal
Jessica Mulroney Says Meghan Is Her "Family"
Salma Hayek Recreates 20 Year Old Bikini Photo