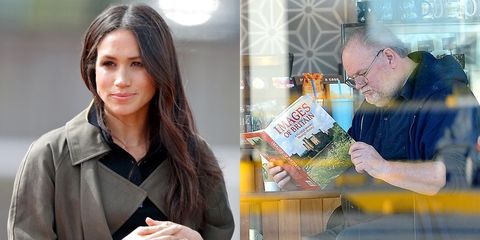 More distressing news this morning: TMZ is reporting that Thomas Markle is planning to check himself into the hospital after experiencing more chest pains. Meghan Markle's father reportedly suffered a heart attack seven days ago and is worried about another. TMZ states that they've spoken to Markle who says "the pains have been triggered by emotional upset."

"I've been popping Valium for the pain, especially when I hear about my oldest daughter," Markle told TMZ, referencing Meghan's half-sister, Samantha Grant.

The news comes after Markle confirmed to TMZ that he was not planning to attend his daughter's wedding this weekend after all. He reportedly "decided not to go because he doesn't want to embarrass the royal family or his daughter." The decision was apparently made after it was discovered that Markle staged paparazzi photos of himself looking at cute photos of Meghan Markle and Prince Harry and getting a suit tailored.

After the revelation, Markle's eldest daughter, Samantha, came to her father's defense, claiming responsibility for the photos and suggesting the plan was her idea.

"The bad press over my father doing staged photos is my fault," she wrote in a tweet, which the Daily Mail captured. "The media was unfairly making him look bad so I suggested he do positive photos for his benefit and and the benefit of the royal family. We had no idea he would be taken advantage of. It was not for money @KensingtonRoyal."

In response to the news about her dad and the paparazzi photos, Meghan is reportedly "upset and disturbed by the entire ordeal and just wants to move past it," according to a source.

Kensington Palace responded in a statement:

"This is a deeply personal moment for Ms. Markle in the days before her wedding. She and Prince Harry ask again for understanding and respect to be extended to Mr. Markle in this difficult situation."

A source tells the Daily Mail that Prince Harry feels responsible for what's happening to Meghan and her family: "Harry feels guilty that this has happened to someone he loves because they are in a relationship with him...He wants to protect her and this is really difficult for him to swallow.

The source also states that Meghan is still hoping that her dad will change his mind: "This is not what she wants. She obviously wants her dad there. And the idea of contemplating him not being there now is not something that she wants to have to do."

Thomas Markle told TMZ that he has not heard from Meghan since the outlet ran the story yesterday reporting he would not be attending the royal wedding.