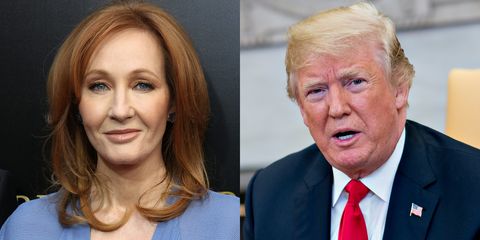 Oh, hey! It's May 19, which means Prince Harry and Meghan Markle just got married—and while we're all crying together (even Harry did when he first saw Meghan), J.K. Rowling is on Twitter trolling Donald Trump hard using royal wedding photos.

The Harry Potter author, who happens to be a famous Brit, herself, tweeted two similar photos: One of the sea of people lining the streets of Windsor, waiting to catch a glimpse of the newlyweds, and another of the noticeably smaller crowd of people who attended Trump's inauguration speech in 2017. Rowling simply wrote: "Love>Hate."

Yes, of course, some sort of drama was bound to happen today—though, we thought it might be something to do with Meghan's dad, who didn't attend the wedding.

There's been a bunch of controversy over Trump's inauguration crowd-size, started by none other than Trump, himself. He claimed the media misrepresented the number of people who attended his swearing in by using this photo as reference to compare to Obama's turnout. It was estimated that anywhere from 250,000-600,000 people actually showed up to Trump's inauguration, while closer to one million people went to Obama's.

Obviously, we got the message she was trying to send. We'll need to wait for the official numbers to roll in before we can know if Meghan and Harry's wedding day had more attendees than Trump's inauguration. Judging by what we saw today, we might guess, YES! After all, a fairytale wedding seems way more fun to attend!