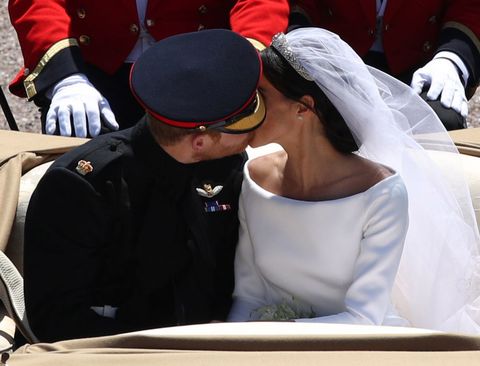 Meghan Markle and Prince Harry shared their first kiss as a married couple just outside St George's Chapel in front of friends, family, and fans—and received a whole lot of applause for it:

But the couple snuck a second smooch during a slightly quieter moment (is a quiet moment possible when you're Prince Harry and Meghan Markle on the day of the royal wedding?!) as the two drove through Windsor in the royal carriage:

The two shared a lot of intimate, sweet moments throughout the day (actually there were a lot of cute moments, generally), but this secret little kiss they stole is very them. While Prince William and Kate Middleton are known for keeping the PDA to a bare minimum to follow royal protocol, Meghan and Harry are more lax, holding hands and openly showing affection during public events—so it makes that on their wedding day, they'd behave similarly.