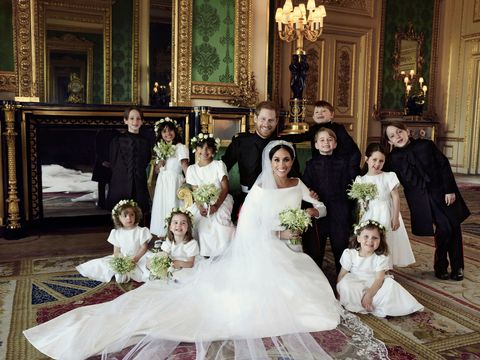 Today, Kensington Palace released the official Royal Wedding portraits of Meghan Markle and Prince Harry, which includes shots of the couple with their families, their wedding party, and a sweet photo of the pair solo that looks just like their engagement photo.

The photos were taken at Windsor Castle, Saturday, by photographer Alexi Lubomirski.

The couple released the portraits with a special thank you to everyone who took part in their wedding day. "They feel so lucky to have been able to share their day with all those gathered in Windsor and those who watched on television across the UK, Commonwealth, and around the world," read the statement.

Meghan looks beautiful in all the shots (she and Harry look so happy!), but the real star of the official portraits is Prince George, royal ham.

The young prince was exceptionally shy in front of the cameras on Saturday, hiding behind his dad and offering just an adorably grumpy little wave (especially compared to his sister, Princess Charlotte, waver extraordinaire) to his uncle and new aunt as they departed the chapel in their carriage.

But it looks like perhaps he was just saving it for the (official) cameras.