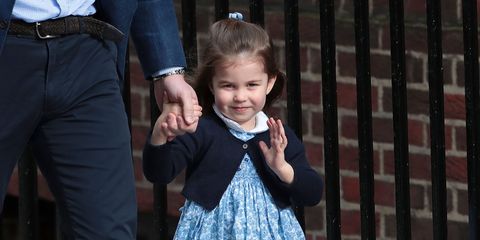 This morning, Kate Middleton gave brith to her third child with Prince William. Not long after the the baby boy—who is now officially fifth in line for the British throne—was born, Will left to pick up Prince George and Princess Charlotte from school for a trip to meet their little brother.

"I'll be back in a minute," Prince William explained to the press waiting outside the hospital when he left.

When Will and the kids returned, Charlotte stole the show by waving incessantly at the crowd.

Charlotte, who only seems to get more adorable every time we see her, is clearly comfortable being in front of a crowd of adoring fans.

Seriously, the two-year-old has the royal princess wave DOWN.

Even as Will led the kids into the Lindo Wing at St. Mary's Hospital, where Kate gave birth, Charlotte continued to look back and wave at her many, many fans.

It's tradition in the British royal family to bring the older sibling(s) to the hospital to meet the new edition before his or her debut to the world. The tradition actually dates back to Prince William himself, who visited his mother, Princess Diana, in the hospital to officially say hello to his baby brother, Prince Harry.

Here's a picture of Prince Charles leading Will into the hospital. Will did not turn back to wave to the press, so maybe Charlotte takes more after Kate (Prince George, for what it's worth, was also not interested in turning back to wave to the onlookers).

Getty Images
Related Stories
Here's Your First Look at Royal Baby 3
See All the Adorable Photos of the New Royal Baby
See What Kate Middleton Wore to Leave the Hospital
Kayleigh Roberts Contributor Kayleigh Roberts is the weekend editor at Marie Claire, covering celebrity and entertainment news, from actual royals like Kate Middleton and Meghan Markle to Hollywood royalty, like Katie Holmes and Chrissy Teigen.
This content is created and maintained by a third party, and imported onto this page to help users provide their email addresses. You may be able to find more information about this and similar content at piano.io
Advertisement - Continue Reading Below
More From The Ultimate Guide to the Royal Family
Will Asked His Uncle to Talk to Harry About Meghan
Why the Queen Denied Meghan's Wedding Tiara Pick
Advertisement - Continue Reading Below
Will & Harry's Reactions to Their Parents' Divorce
Harry & Meghan's Drama Won't Be on 'The Crown'
Will's Talk with Charles That Led Him to Kate
The Queen Saved Will from a Breakdown as a Teen
Prince Philip Has "Walked Away" From Prince Harry
Jessica Mulroney Slams Fake Friends on Instagram
Princess Charlene of Monaco's Top Looks
Diana's Note About Her BBC Interview Is Missing