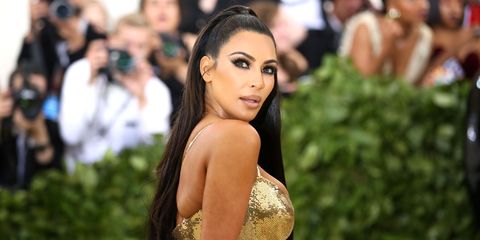 Kim Kardashian is fiercely protective of her family and that includes her husband, Kanye West. Kim took to Twitter to rail against Rhymefest, the co-founder of the charity Donda's House, named after West's mom, who passed away in 2007.

Kim was not having the criticism and laid into Rhymefest, taking him down in front of her 60 million followers.

"U haven’t been right since u got kicked out of the studio in Hawaii wearing fake Yeezy’s @RHYMEFEST You’re over levergenging [sic] Kanye’s name & asked Kanye to donate money to u so stop w your fake community politics & lies. Truth is you haven’t been able to sustain the foundation," she wrote, later apologizing for misspelling "leveraging. "Typing while pissed will do this to you," she explained. Yep. Been there.

Kim went on to accuse Rhymefest of pretending to be cool with Kanye to his face for help with his career:

I saw you at our studio a few weeks ago so why didn’t you bring this up then @RHYMEFEST ? You were trying to get Kanye to listen to your sub par beats. You have the audacity to use Kanye’s mom name to try to shead a negative light on Kanye.

Kim also let Rhymefest know that she plans to take the charity away from him and put it in the hands of her children when they're old enough to take control.

"You better believe I will make it my mission to take Donda’s House from you and let my children run it the way it should be run! @RHYMEFEST."

You better believe I will make it my mission to take Donda’s House from you and let my children run it the way it should be run! @RHYMEFEST

She went on to let Rhymefest know that, as far as the Kardashian-West family is concerned, he's canceled.

Oh and lastly your flight cancelled to Wyoming. You thought you were really worthy to be on this album 😂😂😂

And finally to apologize to her followers for tweeting so much about someone they probably hadn't heard of. Burn.

Sorry to all of my followers for flooding my timeline I know you have no idea who Rhymefest is.

Kim has an established history of defending her husband, even during his biggest PR issues. She famously did damage control after West's viral Twitter rant in April and, of course, posted video of West's conversation with Taylor Swift after the singer took aim at West for a lyric about her in his song "Famous."