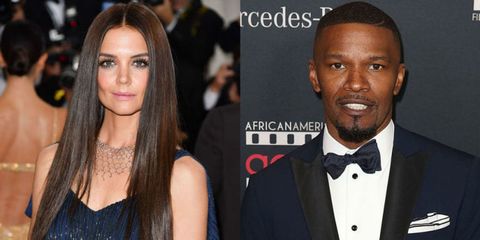 Turns out, everything you've read about Katie Holmes and Jamie Foxx is true. Or at least, the part that romantically links them together. The relationship, which first sparked rumors in 2013 when they were spotted dancing together in the Hamptons, has been confirmed by Real Housewives of Atlanta alum Claudia Jordan. Claudia, who says Jamie is a "good friend of mine," let the news slip during an interview on the Allegedlypodcast with Theo Von and Matthew Cole Weiss. The hosts were going through a list of all the rumored romances Claudia's been linked to in the past. When Jamie came up, she straight up said they never hooked up. Enter Katie, and these nice words from Claudia: "He is very happy with her so…I like that he seems very happy." (To hear these words with your own ears, fast forward to the 42 minute mark in the latest Allegedly episode).

Claudia's comments come months after the couple was spotted wearing rings on their respective ring fingers. The actor's rep later slammed that rumor. In May, Katie's rep told the Mirror that a report alleging that Katie was pregnant was "categorically untrue."

Katie, who is currently filming the TV miniseries The Kennedys: After Camelot, recently posted this cryptic photo to Instagram. As with everything on social media and dating rumors, take this with a coarse grain of salt (but also maybe secretly congratulate Katie and Jamie on the official, public birth of their relationship):