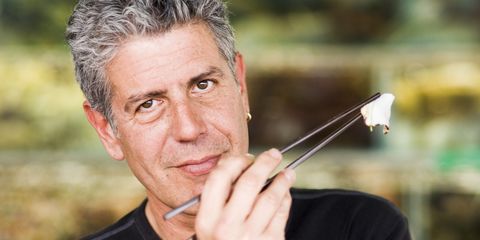 Anthony Bourdain, famed chef, storyteller, and television personality, has died at 61. "It is with extraordinary sadness we can confirm the death of our friend and colleague, Anthony Bourdain," CNN announced early Friday morning.

Bourdain was reportedly in France working on an episode of his series Parts Unknown, where French chef Eric Ripert found him unconscious. Bourdain died by suicide, multiple sources have confirmed.

The tragic news, which comes days after designer Kate Spade took her life, has sent waves through the celebrity community. Ahead, celebrities, chefs, and reporters remember Bourdain.

Anthony. One of my idols. Unapologetic, passionate and one of the best storytellers on the planet. Thank you for making food so exciting. And always standing up for everything right. Horrible. Why why why. Be at peace now :(

Stunned and saddened by the loss of Anthony Bourdain. He brought the world into our homes and inspired so many people to explore cultures and cities through their food. Remember that help is a phone call away US:1-800-273-TALK UK: 116 123

According to AFSP, there are nearly 45,000 suicides every year in the US. Shocking. I was saddened to hear of the deaths of Kate Spade and Anthony Bourdain. RIP. It illustrates that success is not immune to depression. We all need to be more aware of our friends who are suffering

Truly devastated about @Bourdain. I have no words. Please if you need help, reach out. Call the National Suicide Prevention Lifeline at 1-800-273-8255

This is utterly heartbreaking. Thank you for opening our eyes to parts of the world both cherished and unknown. What a legacy. Sending peace and love to his family. If you or someone you love needs help, please reach out or call 1-800-273-TALK. https://t.co/mkht3wTY5m

Also thinking of @AsiaArgento today. Keep her in your prayers. Rest In Peace Anthony Bourdain.

Oh my God @Bourdain has taken his life. People are in unmanageable pain. This is my wake up call today. We have to help those who cannot help themselves.

A piece of my heart is truly broken this morning. And the irony, the sad cruel irony is that the last year he’d never been happier. The rest of my heart aches for the 3 amazing women he left behind.
Tony was a symphony. I wish everyone could have seen all of him. A true friend.

I am shocked and deeply saddened. RIP to a father, partner, chef, writer, and incredibly talented man. @Bourdain ❤️ Prayers for his loved ones.

Anthony Bourdain?????? We’ve lost him too? It hurts to hear. Two icons, gone. Both from my age group. It’s truly devastating to hear this about another peer.

So sad to hear the news about Anthony Bourdain’s death by suicide. He was an incredibly charismatic and inspiring man. You never know who might be struggling or what internal battle someone could be facing. The importance of being there to listen and to talk can’t be overstated.

You never know what story someone is writing in their own mind...what battle they're fighting. We MUST keep talking to one another & giving each other a safe space to share & find support. You matter.

I am gutted and saddened upon hearing the news of @Bourdain, a beloved presence in the culinary community. You will be missed. pic.twitter.com/GIAijn3jIL

We lost Kate Spade and Anthony Bourdain, two soaring talents, to suicide. I lost a parent to suicide. The CDC reported yesterday suicide rates in the U.S. are on the rise.

Suicide isn't a burden for distant celebrities. It is a pervasive and growing killer.

A friend of @StarTalkRadio. A friend of Food & Culture. A friend to us all. Anthony Bourdain, RIP. (1956-2018). pic.twitter.com/uVqEgldGsL

So heartbroken to hear about Anthony Bourdain. pic.twitter.com/ceMKAh0rDw

He brought such joy and escape to so many. This is too hard to understand. May he have peace now. https://t.co/lDz58GseI5