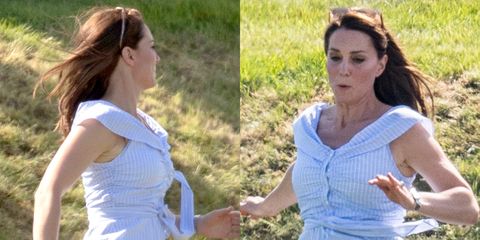 Kate Middleton, Prince George, and Princess Charlotte traveled to Gloucestershire—about two and a half hours northwest of London—to support Prince William today. William is competing in the Maserati Royal Charity Polo Trophy at Beaufort Polo Club and while he did his thing on the pitch, his family had a great time.

The Duke and Duchess of Cambridge were also joined by George and Charlotte's cousins, Savannah and Isla Phillips.

Overall, the royal family had a wonderfully chill play-date at the park—but there was one moment with a little more drama that was caught on camera. At one point, Kate Middleton, wearing a blue Zara sundress and Russell & Bromley espadrilles, had to run. The pictures are priceless and perfect in every way.

Being prepared to run no matter what you're wearing, whether it's to a crying kid or to the car to get something you forgot, is part of the job as a mom. And, obviously, as we all know, Kate is an amazing mom.