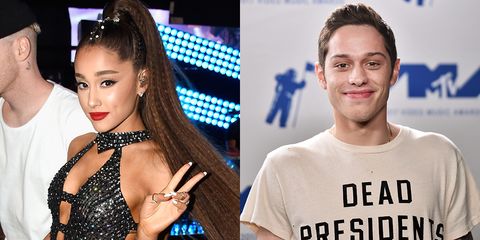 At some point in the dumpster fire that is 2018, Ariana Grande and Pete Davidson became the sole human beings keeping love alive—and their whirlwind romance only continues. Now, the couple seem to have moved in together.

With the “No Tears Left To Cry” singer and SNL comedian confirming their engagement after a few weeks of publicly dating, Ariana and Pete have also seemingly decided that sharing a home is the next step in their relationship. Probably. Maybe?

Y’see, it’s not entirely confirmed, but Ari basically told her fans as much with an image of Spongebob Squarepants, of all things.

The tell-tale pic of Spongebob came with the caption: “Us in our new apartment with no furniture 1 speaker and red vines,” which is pretty self explanatory.

It's likely that this mystery empty apartment could be based in New York City. The night before the big reveal of their (maybe) moving in together, Ariana was spotted in the audience at New York City’s Comedy Cellar to cheer on Pete as he performed a surprise set.

The pair were pictured later on in the evening with friends, which included John Mayer, because celebrities are forever confusing with their inexplicable links and friendships.

Read Next
A Full Timeline of Ariana Grande and Pete Davidson
Lucy Wood Contributor, MarieClaire.com Lucy Wood spends most of her time writing about celebby things, reading books, and waiting for the glorious day that she have enough millions for a pet sloth.
This content is created and maintained by a third party, and imported onto this page to help users provide their email addresses. You may be able to find more information about this and similar content at piano.io
Advertisement - Continue Reading Below
More From Celebrity
Bennifer Recreated Their 2002 PDA Moment
Why Harry's Memoir Release Date Has Upset People
Advertisement - Continue Reading Below
The Royals Are Worried About Prince Harry's Memoir
Gabrielle Union Debuted a New, Short Haircut
J.Lo Made Out With Ben on IG for Her 52nd Birthday
Harry Is Putting the Queen in a Difficult Position
Are Will & Kate Sending a Message to Harry & Meg?
Harry and Meghan Reportedly Have a Four-Book Deal
Naomi Osaka Lit the Olympic Cauldron in Tokyo
John Legend Performed "Imagine" for the Olympics