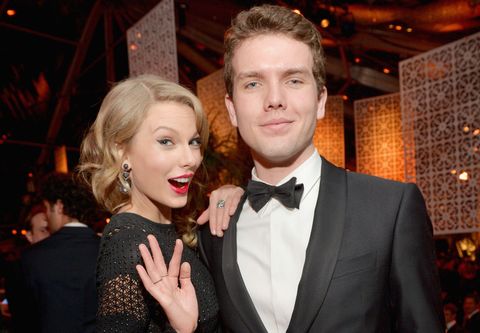 Sometimes, it can be hard to step out of your older sibling's shadow. When that older sib is mega-successful, internationally-famous pop juggernaut Taylor Swift, that shadow probably feels almost impossible to escape. But Austin Swift, Taylor's younger brother, is well on his way to stepping into the limelight.

Austin, 24, just officially made his acting debut with the release of the trailer for his upcoming thriller, I.T., out Sept. 30. The film stars former Bond Pierce Brosnan and, in it, Austin plays a character named Lance. We don't know much else about his big screen debut, but if you look very closely, you'll spot him (albeit briefly) right around the 1:30 mark in the trailer.

This is the first real glimpse we've gotten of Austin Swift The Actor since Taylor gushed about his new gig like the proud big sis she is on Instagram last year.

"My brother @austinkingsleyswift just acted in his first movie and I'm all proud and stuff," she captioned the pic.

We can't wait to see more of Austin's acting chops when I.T. hits theaters this fall.

Kayleigh Roberts Kayleigh Roberts is the weekend editor at Marie Claire, covering celebrity and entertainment news, from actual royals like Kate Middleton and Meghan Markle to Hollywood royalty, like Katie Holmes and Chrissy Teigen.
This content is created and maintained by a third party, and imported onto this page to help users provide their email addresses. You may be able to find more information about this and similar content at piano.io
Advertisement - Continue Reading Below
More From Celebrity
George Won't Be Forced to Go to Boarding School
Diana Would Have Written a Memoir Too, Friend Says
Advertisement - Continue Reading Below
A Slice of Diana's Actual Wedding Cake Is For Sale
Matt Damon Trolled Ben Affleck and Jennifer Lopez
This Old Video of the Queen Saying "Nah" Is LOL
Diana Had a Secret Message on Her Wedding Shoes
Will's Friends Made "Jibes" About Kate's Mom
William Will Suffer "Worst" from Harry's Memoir
Simone's Boyfriend Sent Her the Sweetest Message
Harry's Friends Don't Want to Be in His Memoir