At five months old and as rightful heir of the Kylie Cosmetics dynasty, Stormi Webster is already living a life that the rest of us can only dream of. A social media sensation, with a makeup collection inspired by her birth, and as mom Kylie revealed yesterday, a designer shoe collection that is NEXT LEVEL.

New mother Jenner took to Instagram stories on Tuesday to give fans a sneak peek into her five-month-old daughter’s wardrobe, including a look at the jaw-dropping baby shoe collection rumored to add up to…are you even ready to hear this? You might want to sit down for this. Approximately $22,000 in total. Is it took late to apply to be Kylie Jenner’s first born?

The reality star gave her millions of followers a close glimpse at Stormi’s footwear lineup, which we’re sure she absolutely appreciates and doesn’t just try to chew. Amongst the collection, you’ll spot racks upon racks featuring the likes of $1,000 Giuseppe Zanotti's, $275 Gucci flats and $50 Nike Air Force 1's. Obviously.

Little Stormi turned five months old earlier this week after Kylie privately welcomed her first baby to the world back in February with rapper Travis Scott, following simultaneously one of the best and worst kept secret pregnancies of all time.

Last month, Kylie suddenly deleted all pictures of her daughter from social media and declared that she wouldn’t be sharing updates of her child, but the ban seems to have been lifted this week with Kylie posting photos of Stormi sleeping on her chest on Snapchat.

Stormi, once you’ve outgrown all of these, can I wear them on a necklace or something? 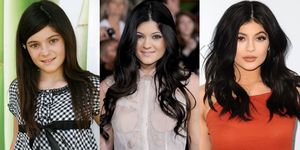 Kylie Jenner's Entire Beauty Evolution
Lucy Wood Contributor, MarieClaire.com Lucy Wood spends most of her time writing about celebby things, reading books, and waiting for the glorious day that she have enough millions for a pet sloth.
This content is created and maintained by a third party, and imported onto this page to help users provide their email addresses. You may be able to find more information about this and similar content at piano.io
Advertisement - Continue Reading Below
More From Celebrity
Who Is Alexandria Ocasio-Cortez's Partner?
Did Charles, Harry, and William Mend Relationship?
Advertisement - Continue Reading Below
The Kardashians' Most Body-Confident Nude Shoots
Chrissy Teigen + Meghan Markle Spoke About Loss
Prince Harry Is Back in Cali With Meghan
Lizzo Just Shared an Unedited Naked Selfie
Queen Elizabeth's Stationery Breaks Tradition
The Queen Shares an Emotional Birthday Message
Chloe From 'Too Hot to Handle' Is in 'The Circle'
Comparing the Two Biggest Royal Weddings