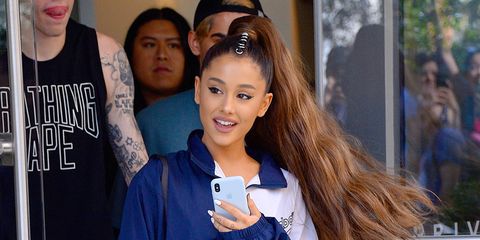 In case you're just joining on the internet for the first time today, Justin Bieber and Hailey Baldwin are reportedly engaged and people can't handle it. People have a lot of feelings about the news, ranging from "WUT? TOO SOON" to "BUT JELEEEEEEEENA" and everything in between.

Of course, given their young age and relatively short romance, Justin and Hailey are getting compared to another recently rushed Hollywood engagement: Ariana Grande and Saturday Night Live star Pete Davidson.

Some fans, pointing out that Justin and Ariana have the same manager (Scooter Braun) are even going so far as to call conspiracy theory/publicity stunt/general not real engagement on both couples.

Ariana, however, sees your comments and she is not here for them. Today, Ariana responded to one of these theories on Twitter and then quickly deleted her response. Thanks to the beauty of screen captures, though, her very salty reply will live forever.

".....You do realize we are human beings who love and have lives.....right....? And that Scooter is a wonderful human being too who cares first [and] foremost ab[out] our health and happiness? Love is lit. Shit happens. I hope to god it happens to you too. [You] deserve it."

When fans pointed out that the initial tweet was intended as a joke, Ariana backpedaled a bit, but the sentiment still stands.

okay okay 🙈 be nice to that man. he’s wonderful. and very human. always puts his artists’ health and happiness first.

Kayleigh Roberts Contributor Kayleigh Roberts is the weekend editor at Marie Claire, covering celebrity and entertainment news, from actual royals like Kate Middleton and Meghan Markle to Hollywood royalty, like Katie Holmes and Chrissy Teigen.
This content is created and maintained by a third party, and imported onto this page to help users provide their email addresses. You may be able to find more information about this and similar content at piano.io
Advertisement - Continue Reading Below
More From Celebrity
Meghan Markle Expresses Sympathies to the Queen
Prince Harry Remembers Prince Philip
Advertisement - Continue Reading Below
Prince William Statement on Prince Philip's Death
Meghan and Harry Are Facing Security Threats
Selena Gomez Is Drenched in Fake Blood on Set
Amanda Seyfried Talked About Having Panic Attacks
Harry Arrives in the U.K. For Philip's Funeral
Matthew Perry Deletes 'Friends' Reunion Instagram
The Queen's Corgis Are Helping Her With Her Grief
Charles is Looking Forward to Seeing Harry Again