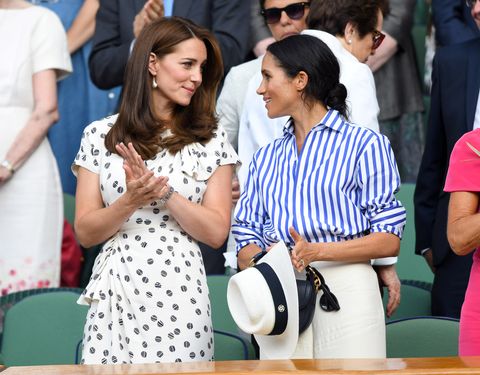 Dressing like a royal isn't cheap—and that's an understatement. Mere mortals don't have the kind of money required to dress like the likes of Kate Middleton and Meghan Markle, but especially the latter. According to a report from the Daily Mail, Meghan's wardrobe is on track to cost significantly more than Kate's this year.

Per the Daily Mail: "Meghan's clothing budget has already outstripped that. Indeed, if she continues at her current rate, she could spend almost £1 million by the end of the year."

How is that possible, you wonder? Well, first of all, royals aren't allowed to accept free gifts or loans, meaning that any designer digs they're spotted in were purchased outright. And Meghan has already shown that she loves designer clothes. Since tying the knot with Prince Harry, Meghan has stepped out in pieces by big name designers like Dior, Givenchy, Prada, and Chanel.

During Meghan and Harry's recent trip to Dublin, the Duchess of Sussex reportedly wore £28,000 worth of clothes in just 24 hours.

Meghan and Harry don't personally pay for the clothes they wear to public engagements. That bill is footed by Harry's dad, Prince Charles. Prior to the royal wedding, Meghan was responsible for buying her own clothes for appearances and reportedly spent almost $30,000 of her own money on clothing for royal events through March 2017.