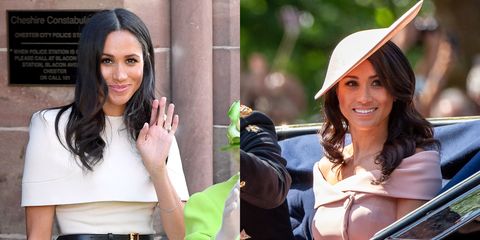 Meghan Markle has been famous for her sense of style much longer than she's been a member of the royal family, but her royal wardrobe has been jaw-dropping.

As Harper's Bazaar UK points out, since becoming the Duchess of Sussex, Meghan stuck to a very specific color palette. She's only worn light shades of white, blush, and cream to her official engagements.

And now, for the photographic proof. For her first post-wedding engagement, Prince Charles' birthday party, at Buckingham Palace, Meghan stepped out wearing a nude Goat dress and matching accessories.

Meghan's next appearance was at the Trooping the Colour parade, where she wore an off-the-shoulder Carolina Herrera dress and a matching Philip Treacy hat.

The next time fans saw Meghan out in public was in Cheshire, during her first-ever solo engagement with the Queen. For the momentous occasion, Meghan wore a custom-made, cream Givenchy dress.

At her Royal Ascot debut, Meghan wore a white shirt dress by Clare Waight Keller for Givenchy, along with an amazing hat.

Then, for her most recent appearance, at the Queen's Young Leaders Awards at Buckingham Palace, Meghan opted for a blush pink Prada skirt suit.

Of course, there was one notable exception to Meghan's new color palette rule: Celia McCorquodale's wedding. She wore a blue, floral Oscar de le Renta dress to Prince Harry's cousins wedding. As Harper's Bazaar UK points out, of course, the wedding was technically a private event and not an official royal engagement, so Meghan hasn't broken her streak at official outings.

"Romance is soft, like a neutral palette—she is a newlywed after all," Guilia Papailias, styling expert at Beaumont Etiquette, told Harper's Bazaar UK of Meghan's current style obsession. "Meghan continues to give us the fairytale that we became enamored with the first day we saw her walk up those stairs. She continues the magic."

This content is created and maintained by a third party, and imported onto this page to help users provide their email addresses. You may be able to find more information about this and similar content at piano.io
Advertisement - Continue Reading Below
More From The Ultimate Guide to the Royal Family
Queen's Cousin Accused of Selling Access to Putin
Meghan Wore a Meaningful Necklace for Vax Live
Advertisement - Continue Reading Below
Queen Elizabeth Is Now Selling Beer and Gin
Meghan Markle Wore Carolina Herrera for Vax Live
Princess Charlotte, 6, Tells Everyone She's 16
Meghan Wears Cartier Tank Watch for Vax Live
Meghan Discussed Her Daughter in Vax Live Speech
Prince Harry Talks Digital Pandemic at Vax Live
Harry and Will Have Been Arguing for Months Now
Prince Harry Doesn't Regret His Oprah Interview