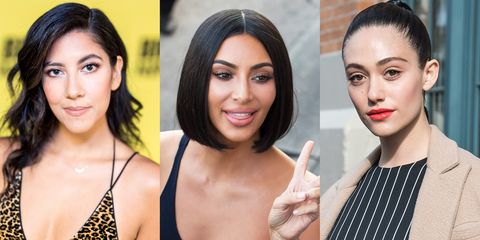 Late this weekend, Kim Kardashian’s Instagram Story sparked a firestorm on social media after she filmed sisters Khloe Kardashian and Kendall Jenner commenting on Kim's recent weight loss. Their comments weren't necessary the problem—but Kim’s positive, excited reaction to being called “really skinny” and “anorexic” definitely didn't fly with a lot of people. Two such critics included actresses Emmy Rossum and Stephanie Beatriz, who both took to their social media platforms to explain why they were concerned by the reality star’s posts.

In the series of videos taken backstage at the Kardashians’ most recent public appearance, Kim revealed that she now weighs 119 pounds after following a strict weight loss regime. “You look so skinny,” model Kendall tells her sister, jokingly adding: “I’m really concerned, I don’t think you’re eating.” Kim responds by saying: “Thank you!”

Brooklyn Nine-Nine’s Stephanie Beatriz used the opportunity to share her own story and how Kim's weight loss coverage had affected her. “Kim Kardashian saying what she weighs and her sisters complimenting her being so skinny is like eating my brain rn,” the 37-year-old actress wrote on her Instagram story. “There’s only one time in my life when I ever weighed 119 pounds. It was right in the middle of a terrible relationship, and intense eating disorder, and I thought that I could be thinner and look even better.”

“Everyone kept complimenting me on how I looked, and I felt desperate to stay at that weight. IT SUCKED,” Beatriz admitted. “So if this shit b fucking w you I GET IT. Try not to hurt yourself over it. I’ve been texting friends for support.”

Having spotted her friend’s post, Shameless star Emmy Rossum responded in agreement and to offer further words of encouragement to anyone in a similar position. She wrote: “@iamstephbeatz, the only time I was 119 pounds is when I had MONO. On a magazine shoot everyone was ‘freaking out over how good’ I looked. I had lost 10 pounds and was gaunt and sick and felt faint… It totally messed with my head. I love you and I’m with you.”

Of course, it's not the first time that Kim's public relationship with weight loss and dieting has sparked controversy. Appetite suppressant lollipop, anyone?

Related Stories
Kim Kardashian Was Naked When Trump Called Her
How Kylie Jenner Got That Massive Scar On Her Leg
10 Most Emotional Kim Kardashian Moments Ever
Lucy Wood Contributor, MarieClaire.com Lucy Wood spends most of her time writing about celebby things, reading books, and waiting for the glorious day that she have enough millions for a pet sloth.
This content is created and maintained by a third party, and imported onto this page to help users provide their email addresses. You may be able to find more information about this and similar content at piano.io
Advertisement - Continue Reading Below
More From Celebrity
What Happens on Katie's Season?
Bennifer Recreated Their 2002 PDA Moment
Advertisement - Continue Reading Below
Why Harry's Memoir Release Date Has Upset People
The Royals Are Worried About Prince Harry's Memoir
Gabrielle Union Debuted a New, Short Haircut
J.Lo Made Out With Ben on IG for Her 52nd Birthday
Harry Is Putting the Queen in a Difficult Position
Are Will & Kate Sending a Message to Harry & Meg?
Harry and Meghan Reportedly Have a Four-Book Deal
Naomi Osaka Lit the Olympic Cauldron in Tokyo