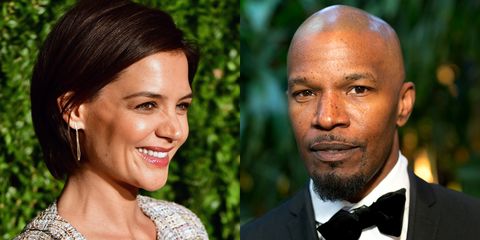 Although we live in the era of Justin Bieber and Hailey Baldwin-level PDA, my heart goes out to the celebrities that keep their relationships low-key. Exhibit A: Although Katie Holmes and Jamie Foxx have been dating for five years, their public outings are incredibly rare (and all the more coveted). So, when the duo stepped out for an uncharacteristically affectionate date in California last week, I couldn't help but promptly freak the heck out. You can see the photos here.

After finally confirming the status of their relationship last month, Holmes and Foxx took a cute-as-hell day trip to Malibu where they played (yes, played) in the sand like a couple of loved-up teenagers. "They were totally engaged with each other," an onlooker told Us Weekly. "They were never on their phones. She had this incredible smile on her face. She looked smitten."

Since getting together in 2013—shortly after Holmes' very public divorce from Tom Cruise—the actors have gone to great lengths to hide their relationship (they even reportedly rented out entire restaurants on date nights to avoid being scene together). "Katie and Jamie care about each other a lot and they tried to stay as quiet as possible because they didn’t want to ruin that," a source close to Holmes says. "They knew the second they stepped out together, it would open the gates for criticism."

Welp, I for one am excited these lovebirds are finally coming out of the woodwork. Here's to (hopefully) many more PDA-filled dates.

Related Story
Katie Holmes and Jamie Foxx Haven't Split
Ruby Buddemeyer Beauty Editor Ruby is the beauty editor at Cosmopolitan, where she covers beauty across print and digital.
Advertisement - Continue Reading Below
More From Celebrity
Khloé Kardashian Is Being Trolled Over Febreze
Katie Holmes Is in Head-to-Toe Chloé at Their Show
Advertisement - Continue Reading Below
A 'Friends' Reunion Special Is Coming to HBO Max
Ariel Winter Now Has Strawberry Blonde Hair
46 Stars Who Dated Before They Were Famous
Every Easter Egg in Taylor Swift's 'The Man' Video
Kate Middleton Does Some Sports in $38 Sneakers
Sarah Hyland Defends Ariel Winter’s Dress on Insta
Prince Harry Wants to Go by Just "Harry" Now
Ashley Graham Talked Breast Pumping in an Uber