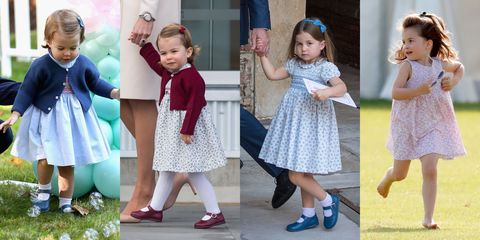 Members of the royal family live by a lot of rules and not-technically-rules that stem from centuries of tradition. These rules and traditions dictate what they can eat, what games they can play, and sometimes what they can wear in public.

Prince George is famously only allowed to wear shorts in public and Meghan Markle was reportedly banned from wearing a tuxedo during her upcoming trip to Australia. As anyone who follows the royal family's fashion sense even a little knows, Princess Charlotte also has a very distinct style.

That style, in case you somehow haven't noticed, is a knee-length baby doll dress, usually in shades of pink and light blue and often with an adorable floral pattern.

Sometimes, weather-permitting, Charlotte will accessorize with a matching cardigan.

"If you look at photos of young royal girls – from Princess Anne to Charlotte, you will notice that they tend to wear smocked dresses as little girls when they are in public with their parents," royal expert and Royal Musings blog founder Marlene Koenig told Harper's Bazaar of Charlotte's look.

It's important to note, however, that there is no hard and fast rule that says Charotte can't wear pants in public.

"There are no rules about no pants," Koenig said. "If the Duchess is in a dress in public and Charlotte is with her, most likely Charlotte, at this age, will be in a dress – also in formal portraits, or on the balcony for the Trooping of the Colour."

In fact, Charlotte was once photographed wearing shorts while playing with her big brother, George. Because the photos weren't taken during an official public appearance, tradition presumably didn't take precedence. Koenig suspects this is pretty typical for private playtime for Charlotte.

"I expect that when the kids are at home, playing in the nursery or in the backyard, they are wearing more casual clothes," Koenig explained.

Since Charlotte already has an established history of wearing George's hand-me-downs, maybe we'll see her in some his adorable shorts someday. Fingers crossed.

Kayleigh Roberts Contributor Kayleigh Roberts is the weekend editor at Marie Claire, covering celebrity and entertainment news, from actual royals like Kate Middleton and Meghan Markle to Hollywood royalty, like Katie Holmes and Chrissy Teigen.
This content is created and maintained by a third party, and imported onto this page to help users provide their email addresses. You may be able to find more information about this and similar content at piano.io
Advertisement - Continue Reading Below
More From Royal Family Fashion Guide
The Meaning Behind the Royal Family Member's Names
Meghan Wore a Meaningful Necklace for Vax Live
Advertisement - Continue Reading Below
Meghan Markle Wore Carolina Herrera for Vax Live
Kate Middleton's Nod to Diana at Philip's Funeral
The Most Genius Royal Fashion Hacks of All Time
Pippa Middleton Goes for Stylish Stroll In London
Meghan Markle Wears Armani for Her Oprah Interview
Shop Meghan's Stunning $30 Summer Dress
Duchess Kate Wears a Sleek Green Blazer
The 6 Most Expensive Royal Wedding Dresses