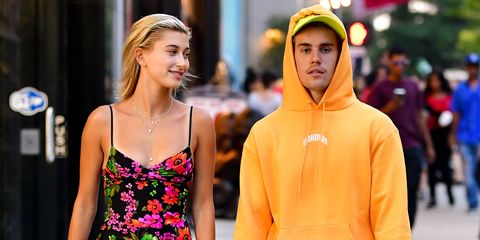 The Sumer of 2018 brought us a lot of quick, surprising celebrity engagements—including that of Justin Bieber and Hailey Baldwin. While diehard Jelena shippers might still be holding out hope that Justin and Hailey will fizzle out, they honestly seem like a pretty great couple.

According to Us Weekly, Hailey deserves some of the credit for pulling Justin down to earth and helping him put his "crazy" phase (you know, peeing in buckets, egging his neighbors' homes, etc.) behind him for good.

“Justin is really in love with Hailey. He loves that she is super chill and down to do anything,”a source close to the singer told Us Weekly. “Hailey has calmed Justin down a lot, and she has changed him as a man. He thinks she is his forever and considers her his best friend and soulmate."

The new Justin is a guy who is happy to stop and talk to fans and that's also at least partially because of Hailey and his love of showing off his love.

"Justin is over his crazy phase, and is more approachable and has been talking to lots of fans when he’s out," the source said. "He’s happy to show the world that Hailey is his girl and he feels at ease with her."

The Justin/Hailey insider had tons to say because he or she also offered some details about their highly-anticipated wedding, which, frankly, it sounds like they would both like to be a little (or a lot) less anticipated.

"They want a private wedding without media scrutiny and just want it to be with friends and family," the Us source said. "Justin also believes that God has helped him a lot."

This content is imported from {embed-name}. You may be able to find the same content in another format, or you may be able to find more information, at their web site.
Kayleigh Roberts Contributor Kayleigh Roberts is the weekend editor at Marie Claire, covering celebrity and entertainment news, from actual royals like Kate Middleton and Meghan Markle to Hollywood royalty, like Katie Holmes and Chrissy Teigen.
This content is created and maintained by a third party, and imported onto this page to help users provide their email addresses. You may be able to find more information about this and similar content at piano.io
Advertisement - Continue Reading Below
More From Celebrity
This Is Dax and Kristen's Approach to the Sex Talk
Angelina Jolie Dodged a Question About The Weeknd
Advertisement - Continue Reading Below
Kourtney and Travis Want a "Destination Wedding"
Harry Panicked About the Queen's Hospital Stay
Olivia Munn Doesn't Care About "Settling Down"
These 83 Twitter Accounts Harass Meghan Markle
Adele's Ex Came to a Special Taping of Her Album
Kristen Stewart on a "Spooky" Moment Playing Diana
Travis Covered His Ex' Name With Tattoo for Kourt
Kendall Jenner Wore a Bedazzled Pink Cowboy Hat