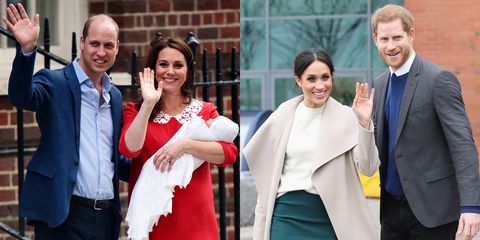 Is your Facebook feed full of stories about the royal family? Are you confused about why the whole world suddenly seems so obsessed with the British monarchy? Well, science (specifically psychology) might just have the answer.

Related Story
Celebrities Who Are Friends With Royals

The world has always been a stressful, sometimes depressing and anxiety-inducing place to exist, but for many those negative feeling have intensified in recent years (particularly since November 8, 2016). Even if you never really cared about the royal family in the past and even if you're perplexed or even a little annoyed by their omnipresence in your social feeds, you probably don't go into a panic when you see stories about them, either.

And there's a reason stories about the royal family are so calming, even compared to other celebrity stories and fluffy non-news you might encounter. According to Dr. Donna Rockwell, Psy.D., a clinical psychologist who specializes in celebrity and fame, the royal family's strict adherence to procedure and tradition is key. Even just reading about it can trigger the same comforting feeling that a child finds in boundaries and rules.

"It's comforting to see a structure where that structure seems to create a semblance of order," she told Glamour. "So in the same way, I think that when an adult is feeling a sense of inner chaos, it's comforting, even neurologically speaking, to be able to observe something of structure. We see structure, and we feel comforted. So it's actually a neurological response of relaxation that occurs in us in seeing the queen, and the [grand]daughters-in-law, and the line [of heirs]."

Yep. Neurological. As in, your brain actually reacts in a positive way to these stories.

"The universe is profoundly chaotic," Rockwell explained. "So whenever we can anchor ourselves into a sense of order and safety, really, we tend to relax. And that generates the reward center of the brain. Ahhhh, is the reaction."

So, the next time someone rolls their eyes at your royal family obsession, you can explain that it's officially good for your mental health.