Following an undercover pregnancy that proved the Kardashians can in fact keep a secret when they really want to, Kylie Jenner announced the arrival of her first baby on February 4 of this year, three days after giving birth to a girl. It wasn’t until February 6 that she went on to confirm that her daughter had been named Stormi Webster, surprising fans who’d been entirely convinced that she was destined to be called either Butterfly, or Posie.

With the unusual social media silence, it seemed as though Kylie and Stormi’s father, Travis Scott, had simply been enjoying a few days of rare privacy with their new bundle of baby joy—but there was actually a slightly more practical reason for them not announcing Stormi’s name for a few days. They literally hadn't decided just yet. New mom Kylie has now revealed that she actually changed her daughter’s name at the very last minute, and made a totally spontaneous decision about Stormi in the end.

Appearing in a Halloween makeup video with YouTuber James Charles, Kylie explained how she actually came up with the unusual name in the first place. "I was just looking at nature names, like weather and earth inspired," the makeup mogul recalled. "Storm was on there—just Storm. And then I was like, I kinda want '-ie' like me, so then I did Stormie with ‘-ie’."

Kylie went on: “It was always Stormie with an ‘-ie’. I bought custom things for her that said her name, '-ie'. I bought her the blocks, ‘-ie.’ I didn't fully choose her name, I wanted to have a week of just me and her to see if I wanted to change it. I had one other name in mind, but Stormi always felt like her name from when she was in the womb. It's almost like she chose her name."

It wasn’t until Kylie was on the phone to officially register the birth of her daughter that she came to a final, spontaneous decision.

"When they called me from the birth certificate office, and I was finalizing the name, they were like 'how do you wanna spell it?’” Kylie shared. “And I was like S-T-O-R-M-I, and they were like 'you sure?' and I'm like 'yeah, just an i.' Literally right then and there I just changed it to an 'i.' Then I hung up the phone and I was like ‘damn, guess that's her name.’"

Kylie also admitted that Willow was a pretty strong name contender for a while—until she realized that her friendship with Willow Smith got in the way a little. Either way, Stormi or Stormie, Kylie must have been really enjoying all of the cold, hard conspiracy theories around "Butterfly Jenner." 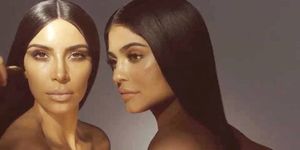 59 Times Kim and Kylie Were the Same Person
Lucy Wood Contributor Lucy Wood spends most of her time writing about celebby things, reading books, and waiting for the glorious day that she have enough millions for a pet sloth.
This content is created and maintained by a third party, and imported onto this page to help users provide their email addresses. You may be able to find more information about this and similar content at piano.io
Advertisement - Continue Reading Below
More From Celebrity
Naomi Campbell Is a First-Time Mom
Ariana Grande Got Married Over the Weekend
Advertisement - Continue Reading Below
Ariana Grande Quietly Married Dalton Gomez
Joie de Tracee
Jennifer Lopez and Ben Affleck: Everything We Know
Harry & Oprah's Mental Health Doc Has a Title
Serena Williams Might Miss the Tokyo Olympics
Jennifer and Ben Have "Unreal" Chemistry Together
The Sussexes Marked Archie's Bday in a Lovely Way
Queen's Cousin Accused of Selling Access to Putin