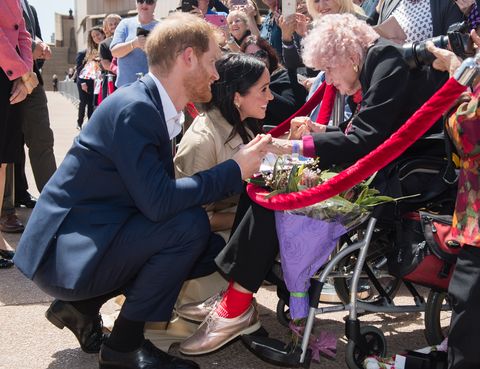 Being a "working royal" is not a part-time job. While some members of the royal family (like Princess Eugenie, who just married her longtime love Jack Brooksbank) can have regular jobs and regular-ish lives, the inner circle of the Windsor fam are full-time public figures and representatives of the monarchy and the United Kingdom around the world. Representing a whole country all around the world means a lot of travel and right now, Prince Harry and Meghan Markle are Down Under, repping Queen Elizabeth II like champs.

The trip marks the couple's first royal tour since they wed in May and Meghan's first royal tour, well, ever. Harry, however, is a royal tour veteran and no stranger to Australia in particular. He's visited the country twice in recent years alone—in 2015 and 2017.

During those visits, he met with countless Australian officials and royal fans, but one formed a special bond with Harry: 98-year-old Daphne Dunne.

Harry and Daphne connected during both his 2015 and 2017 trips to Australia and when Harry and Meghan stepped out to greet crowds of well-wishers at the Sydney Opera House on Tuesday, the nonagenarian was there, waiting to say hi to her old friend. Harry greeted Daphne with a hug because that's how old friends say hello and they are forever BFFs (in my mind, at least).

Naturally, Harry introduced Meghan to Daphne, who was immediately like, "I heard the good news!" The good news, of course, is the Meghan and Harry are expecting their first child (the couple announced the news on Monday, just before they arrived in Australia).

"Thank you!" Meghan replied, according to E! News. "What an exciting time. Yes, I've been so happy."

Dunne reportedly said the news was "marvelous" and "just what Harry needs."

And, in case you're doubting this friendship at all, Meghan was also overheard telling Daphne that she had seen the pictures of her and Harry from his last two visits to Australia and that they were "very sweet." Harry shows off pictures of his best Aussie friend. It's adorable.

Related Stories
Harry and Meghan Have Arrived in Australia
The Latest on Meghan and Harry's First Royal Tour
Kayleigh Roberts Contributor Kayleigh Roberts is the weekend editor at Marie Claire, covering celebrity and entertainment news, from actual royals like Kate Middleton and Meghan Markle to Hollywood royalty, like Katie Holmes and Chrissy Teigen.
This content is created and maintained by a third party, and imported onto this page to help users provide their email addresses. You may be able to find more information about this and similar content at piano.io
Advertisement - Continue Reading Below
More From The Ultimate Guide to the Royal Family
Meghan and Diana Had Similar Issues with the Queen
The Queen Insisted on Cutting a Cake with a Sword
Advertisement - Continue Reading Below
Harry Texted Kate, Not Will, When Lili Was Born
Kate's Kids Want Her to Stop Taking Their Pictures
Kate Wore a Pearl Bracelet That Used to Be Diana's
Harry's HRH Title Was Removed from a Diana Display
Harry and Meghan Are Trying to Keep the Peace
Films That Pull Back the Curtain on Royal Life
Harry Was Left to Suffer After Diana's Death
How Queen Elizabeth II Got the Nickname Lilibet