Today in non-royal celebrity news, Britney Spears posted a subtle nod to her most famous (and infamous, purely in terms of how the breakup went down) ex, Justin Timberlake, on Instagram.

In a new video posted to her account, Britney does an impressive series of five backflips while the "I Think She Knows" interlude from Justin's 2007 hit "LoveStoned" plays in the background.

Britney and Justin had a notoriously bad breakup in 2002 after Britney allegedly cheated on Justin. In response to the heartbreak, Justin released "Cry Me a River," the song that arguably cemented his career as a solo artist. Justin's heart has since healed, of course. In a 2011 interview with Vanity Fair, he addressed the relationship, saying:

"I wish her the best—that goes without saying. We haven’t spoken in 9 or 10 years...We were two birds of the same feather—small-town kids, doing the same thing. But then you become adults, and the way you were as kids doesn’t make any sense. I won’t speak on her, but at least for me, I was a totally different person. I just don’t think we were normal; there was nothing normal about our existence. We spent way too much time being the biggest thing for teenyboppers."

Britney is obviously also in a good place about the relationship, seeing as she now casually works out to old Justin tracks and posts the receipts on Instagram for good measure:

The Justin song grabbed a lot of fans' attention, but the thing we should actually be impressed by are the backflips, which are great. 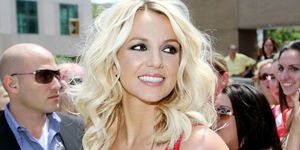 How Much It Costs to Live Like Britney Spears
Britney Spears's Art Sells for $10,000
Kayleigh Roberts Contributor Kayleigh Roberts is the weekend editor at Marie Claire, covering celebrity and entertainment news, from actual royals like Kate Middleton and Meghan Markle to Hollywood royalty, like Katie Holmes and Chrissy Teigen.
This content is created and maintained by a third party, and imported onto this page to help users provide their email addresses. You may be able to find more information about this and similar content at piano.io
Advertisement - Continue Reading Below
More From Celebrity
Royal Family Shares Rare Photo of Prince Philip
Chloe From 'Too Hot to Handle' Is in 'The Circle'
Advertisement - Continue Reading Below
There's Drama Over Prince Harry's Funeral Attire
Jennifer's Rep Breaks Silence on Adoption Story
Princess Eugenie's Prince Philip Tribute
Serena Williams Signed a Major TV Deal With Amazon
Chrissy Wrote Luna the Sweetest Birthday Message
Prince Harry Has Met Princess Eugenie's Son August
The Queen Returns to Work After Philip's Death
A Brief History Lesson on Brad and Jen