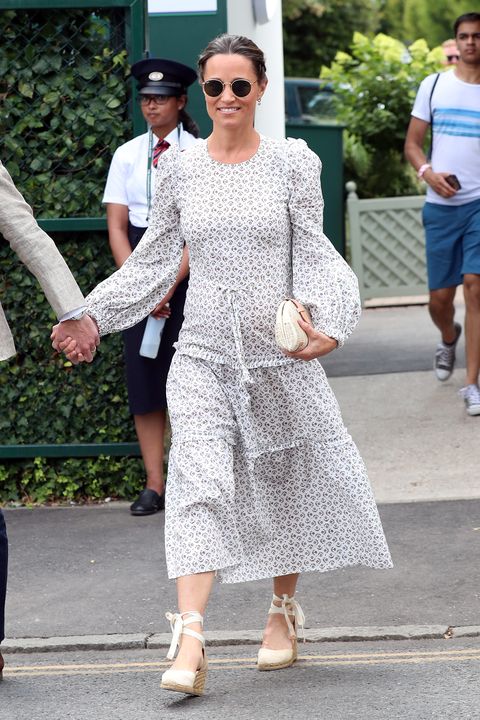 While the rest of the world has been busy watching Prince Harry and Meghan Markle's every single move during their royal tour of Australia, New Zealand, Fiji, and Tonga, Pippa Middleton has been quietly welcoming her newborn son to her family.

Pippa gave birth on Monday, the same day Harry and Meghan announced that they were expecting. Kate Middleton's little sister has stayed pretty low-key about her pregnancy overall. Pippa's pregnancy was announced in April, just before her youngest nephew Prince Louis, was born. Pippa and her husband, financier James Matthews, welcomed a healthy baby boy, which she delivered in the Lindo Wing at St. Mary's Hospital—the same hospital where Kate has delivered all three of her children.

Today, Pippa and James were spotted out with the newest addition to their family for the first time. The couple took their son, whose name has not yet been revealed, and their dogs (Pippa's cocker spaniel, Rafa, and James' black lab), on a walk outside near their £17 million home in Chelsea, in west London.

According to the Daily Mail, which also has exclusive photos of the family outing, Pippa's navy and white polka dot dress is a £350 piece from Kate Spade. The new mom paired the dress with a pair of sneakers which are reportedly £350 Jimmy Choo white leather trainers. Lesson: Even on a casual walk around the neighborhood a mere six days after giving birth to another living human being, Pippa Middleton is stylish AF.

Related Stories
Pippa Middleton Meets Her New Nephew
Pippa Middleton on the Kim K Butt Debate
Kayleigh Roberts Contributor Kayleigh Roberts is the weekend editor at Marie Claire, covering celebrity and entertainment news, from actual royals like Kate Middleton and Meghan Markle to Hollywood royalty, like Katie Holmes and Chrissy Teigen.
This content is created and maintained by a third party, and imported onto this page to help users provide their email addresses. You may be able to find more information about this and similar content at piano.io
Advertisement - Continue Reading Below
More From The Ultimate Guide to the Royal Family
George Won't Be Forced to Go to Boarding School
A Slice of Diana's Actual Wedding Cake Is For Sale
Advertisement - Continue Reading Below
This Old Video of the Queen Saying "Nah" Is LOL
Diana Had a Secret Message on Her Wedding Shoes
Will's Friends Made "Jibes" About Kate's Mom
William Will Suffer "Worst" from Harry's Memoir
Harry's Friends Don't Want to Be in His Memoir
Will & Kate's Modern Approach to Raising George
Why Harry's Memoir Release Date Has Upset People
The Royals Are Worried About Prince Harry's Memoir