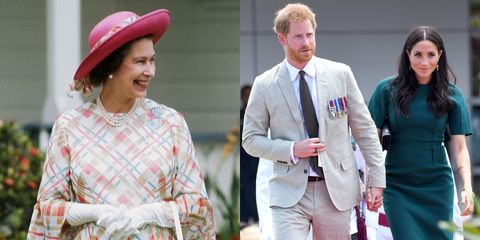 It’s been a complete whirlwind, but the royal tour for the Duke and Duchess of Sussex is already flying by. As the couple hit day ten of their extensive 16-day tour, Prince Harry and Meghan Markle arrived in Tonga as the latest destination on the list, having already completed their appearances in Australia and Fiji.

Their time in Tonga began with a formal reception and state dinner with the country’s King Tupou VI and Queen Nanasipau’u, where Prince Harry gave a sentimental speech. Rather sweetly, his words also included a personal message from his grandmother, Her Majesty Queen Elizabeth II, which recalled the time that she herself spent in Tonga way back during the 50’s and 70’s.

Speaking via Harry, the Queen said: "Your Majesties, it gives me great pleasure that my grandson and his wife are visiting the Kingdom of Tonga…To this day, I remember with fondness Queen Salote's attendance at my own Coronation, while Prince Philip and I have cherished memories from our three wonderful visits to your country in 1953, 1970 and 1977. In the months and years ahead, I wish Your Majesties and the people of Tonga every good fortune and happiness."

The Queen first visited Tonga in 1953, in a whirlwind tour of the Commonwealth nations that makes Harry and Meghan’s current royal tour seem relatively calm. It swiftly followed her coronation, which took place in June of the same year.

In a series of throwback photos shared by Buckingham Palace of the Queen’s time in Tonga, it’s clear that she experienced the same warm and welcoming reception that Harry and Meghan have this time around. Just as they attended dinner with the current reigning monarchs on Thursday, Her Majesty spent time with the famous Queen Salote on her first visit, and shared a traditional banquet with King Taufa'ahau Tupou IV in later years.

In recent royal family documentary Queen of the World, Queen Elizabeth reminisced on the trip, revealing: “It was wonderful. We had people playing the nose flute outside the window. Just the most extraordinary thing. Sounds awfully uncomfortable but they play it rather well. The only thing I found difficult was sitting cross-legged. It’s quite painful for people who are not built in the same direction.”

Related Story
Meghan Markle Re-Wore Her Diana Tribute
Lucy Wood Contributor Lucy Wood spends most of her time writing about celebby things, reading books, and waiting for the glorious day that she have enough millions for a pet sloth.
This content is created and maintained by a third party, and imported onto this page to help users provide their email addresses. You may be able to find more information about this and similar content at piano.io
Advertisement - Continue Reading Below
More From The Ultimate Guide to the Royal Family
Prince Harry on How Tabloid Attacks Changed Him
A Look at Royal Family Portraits Through the Years
Advertisement - Continue Reading Below
A Look Back at Princess Anne's Life in Photos
Kate Had a Big Regret About Her Engagement to Will
An Attack Dog Once Mistook Will for an Intruder
The Queen Is Still Prince Harry's Mentor
Harry Was Homesick for a While, But Is Happy Now
Meghan Wasn't Appreciated for Royal Contributions
Harry & Meghan Have Had a Painful Year Since Exit
The Queen's Hot Grandnephew Is a Thirst Trap