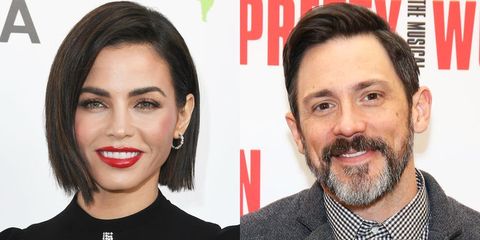 Another day, another celebrity relationship to celebrate. This time, it comes in the form of actress and dancer Jenna Dewan and Broadway actor Steve Kazee, according to People and The Blast. According to a source at People, Dewan and Kazee have "been dating for a couple [of] months and she’s really happy.”Ah, young love.

Update, 9/24: Glory days! Dewan and Kazee, who have been photographed looking deliriously happy for the past year, announced they're expecting their first child. In a statement, Dewan told People: "We are beyond overjoyed and couldn’t be happier to be expanding our family!"

This is the first child for Kazee, and the second for Dewan. The couple just went on a trip to California, where E! reports they looked happy as can be with Dewan's daughter Everly. "They were also very much focused on Everly and made their vacation a family one where she was the priority. Steve was amazing with Everly," a source said.

I mean, just look at how cute these two are.

Original post: As a Broadway and dance lover, I'm always happy to see a relationship bloom amongst the talents of my generation. This arrives after news that Channing Tatum is reportedly dating Jessie J. I did a little snooping, and here's everything to know about the new couple.

Steve Kazee–I'm exhausted just looking at his resume. You'll best know him from his Tony Award-winning performance as Guy from the stage adaptation of the movie Once, but he's also been in Spamalot as well as 110 in the Shade. Most recently, he was Edward opposite Samantha Barks's Vivian in Pretty Woman: The Musical. He's also done roles on TV shows like Blindspot, Shameless, and Nashville, so needless to say, he's pretty multi-faceted.

The Blast reports that Dewan and Kazee were spotted kissing at the Casamigos Halloween Party on Saturday, and on Monday, could be found with a group of friends at the Haunted Hayride in Los Angeles's Griffith Park.

He's quite the musician.

Not only did Kazee and the cast of Once win the Grammy for Best Musical Theater Album at the 55th Grammy Awards, but he's also featured on Christina Perri's song 'A Thousand Years, Pt. 2," which appears on The Twilight Saga: Breaking Dawn – Part 2 soundtrack.

Congratulations to the new couple, I'm rooting for you two.

Related Story
Jenna Dewan Spotted Engaging in PDA with New Guy
Related Story
Jenna Dewan Files for Divorce from Channing Tatum
Amanda Mitchell Amanda Mitchell is a writer and podcaster with bylines at Marie Claire, OprahMag, Allure, Byrdie, Stylecaster, Bon Appetit, and more.
This content is created and maintained by a third party, and imported onto this page to help users provide their email addresses. You may be able to find more information about this and similar content at piano.io
Advertisement - Continue Reading Below
More From Celebrity
George Won't Be Forced to Go to Boarding School
Diana Would Have Written a Memoir Too, Friend Says
Advertisement - Continue Reading Below
A Slice of Diana's Actual Wedding Cake Is For Sale
Matt Damon Trolled Ben Affleck and Jennifer Lopez
This Old Video of the Queen Saying "Nah" Is LOL
Diana Had a Secret Message on Her Wedding Shoes
Will's Friends Made "Jibes" About Kate's Mom
William Will Suffer "Worst" from Harry's Memoir
Simone's Boyfriend Sent Her the Sweetest Message
Harry's Friends Don't Want to Be in His Memoir